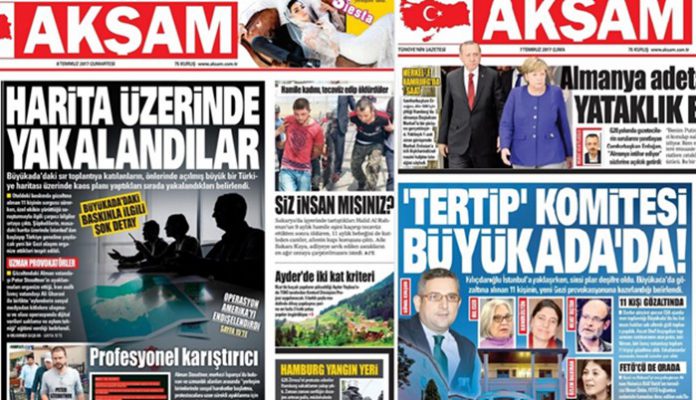 The staunchly pro-government Akşam daily on Saturday claimed that a group of human rights defenders who were detained on Wednesday on an İstanbul island were working on a map for a “new Gezi-protest-like riot plan.”

Recalling a previous claim that CIA operatives gathered on the same island shortly before a coup attempt in Turkey on July 15 of last year, the daily reported that the Turkish police and National Intelligence Organization (MIT) had received new information about a meeting attended by eight human rights defenders and two foreign trainers at a hotel on Büyükada, one of the Princes’ Islands off İstanbul.

According to the daily, the human rights defenders, who were active during the Gezi Park protests in 2013, a member of the Gülen movement and two foreign trainers — a German and a Swedish national — were working on a map of Turkey when security forces raided the hotel.

The pro-gov’t daily claimed that 11 people including the hotel owners were working on how to spread an İstanbul-based riot to the rest of Turkey.

Akşam also claimed that German national Peter Steudtner and Swedish-Iranian national Ali Ghavari were training participants on the use of social media and the mobilization of the people for riots in the future.