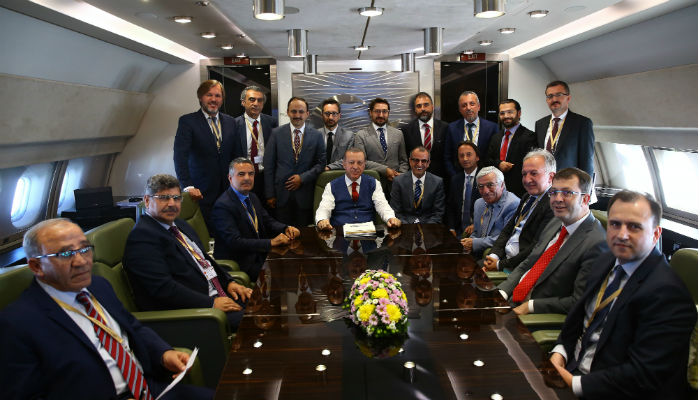 Turkey’s President Recep Tayyip Erdoğan has said the approval of a resolution in the European Parliament (EP) that calls for the freezing of EU accession talks with Turkey does  not have any value and is not binding, the Hürriyet daily reported on Friday.

The resolution calling for the freezing of membership negotiations with Turkey if Ankara implements a constitutional overhaul, backed by a referendum in April, was adopted with a large majority of votes in the EP on Thursday.

Erdoğan, who spoke to journalists on Thursday on his way to the G-20 summit in Hamburg, said:“The [EP resolution] has no value. This decision does not bind us.”

The Turkish president also said he would not bring up the issue of the resolution during his meeting with German Chancellor Angela Merkel since it would imply that he cares about it.

The resolution, proposed by Turkey rapporteur for the European Parliament Kati Piri, “calls on the Commission and the member states, in accordance with the Negotiating Framework, to formally suspend the accession negotiations with Turkey without delay if the constitutional reform package is implemented unchanged.”

The decision was grounded on the incompatibility of the reform package with the principle of separation of powers and the Copenhagen criteria.

Erdoğan also criticized the EP for its stance on the followers of Gülen movement, which he accuses of orchestrating a failed coup attempt last July, and warned European countries to be careful with the movement.

“On the one hand, they are criticizing the coup attempt, on the other hand they are thanking countries that open their doors to FETÖ [a derogatory term used by government circles to refer to Gülen movement] members asking for asylum,” said Erdoğan.

Immediately after the failed coup attempt on July 15, Erdoğan targeted Gülen movement followers. Despite Gülen and the movement having denied the accusation, Erdoğan — calling the coup attempt “a gift from God” — and the government launched a widespread purge aimed at cleansing sympathizers of the movement from within state institutions, dehumanizing its popular figures and putting them in custody.