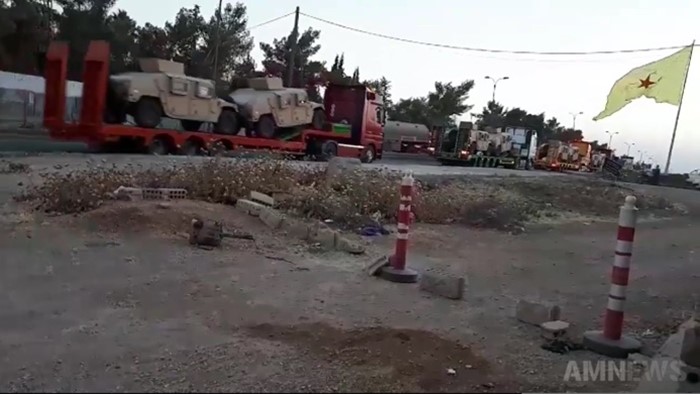 Amid reactions from Turkey about the transfer of American weapons to Kurdish militants in Syria, the US continues to send military aid to the Syrian Democratic Forces (SDF) including Kurdish forces, almastarnews reported on Thursday.

According to the report, video footage has been released showing a large convoy of trucks carrying US-built Humvees. The convoy in question was transiting the Qamishli Governorate and destined for SDF units at the front line near the strategic city of Raqqa.

The Humvees are part of a weapons shipment approved in May of this year by US President Donald Trump to directly and openly supply arms to fighters of the Kurdish People’s Protection Unit (YPG) – the dominant contingent within the SDF – in support of the operation to capture the city of Raqqa from Islamic State in Iraq and the Levant (ISIL) terrorists, the report said.

In May, President Recep Tayyip Erdoğan said he would like to believe that all the information regarding a US decision to provide arms to the YPG in Syria was a rumor.

Speaking to Kanal 24 on Wednesday, Erdoğan said the Turkish military and the Free Syrian Army (FSA) might launch an operation against the YPG in Syria if the militant group poses a security threat.

“It is impossible to believe that the weapons which were given to the YPG could be gotten back,” said Erdoğan, criticizing US support for the YPG.

The state-run Anadolu news agency last week reported that the US has sent a total of 468 truckloads of weapons to the YPG since May 15. Ankara considers the YPG a terrorist organization due to its links with the outlawed Kurdistan Workers’ Party (PKK).

In a bid to clear Turkey’s border of ISIL and stop the Syrian Kurdish Democratic Union Party (PYD) from merging its Kobane and Afrin cantons, Turkey along with FSA troops took control of a 2,015-square-kilometer area after launching Operation Euphrates Shield last August.