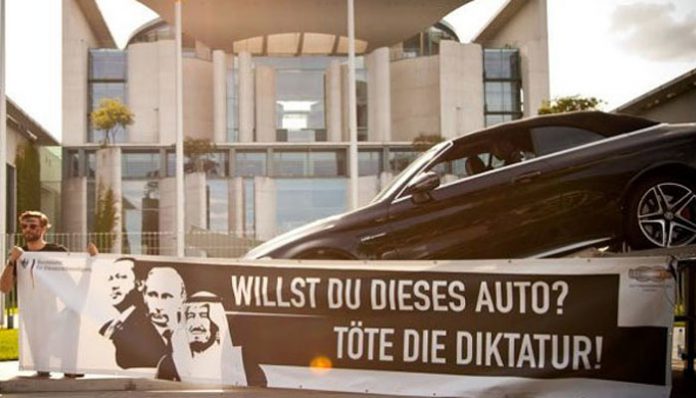 Turkey sent a diplomatic note to Germany on Tuesday protesting an installation by artist Philipp Ruch depicting Turkish President Recep Tayyip Erdoğan along with Saudi King Salman and Russian President Vladimir Putin on a sign in front of a car saying in German “Do you want this car? Kill dictatorship!”

According to a statement released by the Turkish Embassy in Berlin on Tuesday, Turkey said it is unacceptable for German security officials to allow the display of such a banner, adding that actions encouraging violence and hatred do not serve peace.

The embassy said a diplomatic note expressing Turkey’s concerns over the incident had been delivered to the German foreign ministry.

German-Swiss philosopher and artist Philipp Ruch installed the banner in front of a Mercedes C-class car on treads near the German Chancellor Angela Merkel’s office ahead of a G-20 summit starting on Friday.

In the spring of 2016, the Turkish government had officially asked German authorities to put Jan Böhmermann, a comedian and presenter on Germany’s public broadcaster ZDF, on trial on charges of “insulting” Erdoğan in a satirical poem he read during a show.

After Erdoğan asked the German government to authorize an investigation into Böhmermann, Chancellor Angela Merkel approved the request. However, prosecutors ultimately dropped the case in November, saying there was insufficient evidence of wrongdoing.