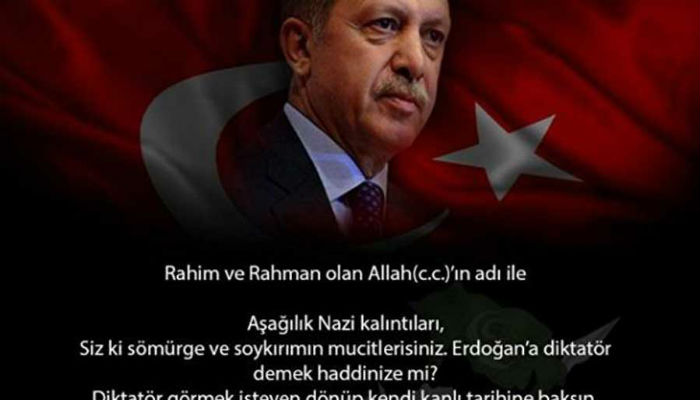 The website of German daily Taz (Die Tageszeitung) has been hacked by a group of supporters of Turkish President Recep Tayyip Erdoğan, the Evrensel daily reported on Monday.

According to the report, the group, which calls itself “Akıncılar” (raiders), shared on the website of the daily a Turkish flag and a picture of Erdoğan with the following message:

“Despicable Nazi remnants, you are the inventors of colonization and genocide, how dare you call Erdoğan a dictator? Those who want to see a dictator should look back to their bloody history. What you will see there will be your dictators with blood on their faces and hands. We are Ottomans, we are Turkey, we are Akıncıs.”

On several occasions ahead of a referendum in April, President Erdoğan accused Germany and some other European countries of employing Nazi practices and being fascists because they refused to allow Turkish government officials to hold campaign rallies there.

“We have given the necessary answer to the German newspaper that has been trying to influence public opinion by publications against the Turkish Republic and President Erdoğan with fabricated and provocative news. As we have done many times before, our mission is to target all countries and websites openly attacking our national and spiritual values. We have always done what is required and we will continue to do so. As long as we exist, they will disappear one by one,” said the group in a statement shared by Sputnik news.