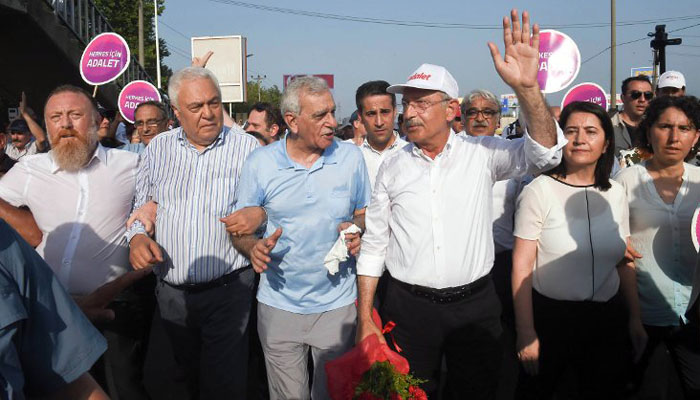 A pro-Kurdish Peoples’ Democratic Party (HDP) delegation has joined a “March of Justice,” launched by Republican People’s Party (CHP) leader Kemal Kılıçdaroğlu, in the Kandıra district of Kocaeli province, on its 19th day, the Gazeteduvar news website reported on Monday.

The HDP delegation, consisting of Co-chairperson Serpil Kemalbay and deputies, joined the march in front of Kandıra Prison, where former Co-chairperson Figen Yüksekdağ is being held.

Jailed HDP Co-chairperson Selahattin Demirtaş and Yüksekdağ have called for solidarity among opposition groups in Turkey and expressed their support for the March of Justice.

Kılıçdaroğlu initiated the march from Ankara to İstanbul on June 15 in protest of the arrest of CHP deputy Enis Berberoğlu, who was sentenced to 25 years in prison on June 14 for leaking information for a report on National Intelligence Organization (MİT) trucks transporting weapons to jihadists in Syria.

As of July 3, Kılıçdaroğlu had covered 315 out of the 420 kilometers to İstanbul. He will end the march at Maltepe Prison, where Berberoğlu is jailed.