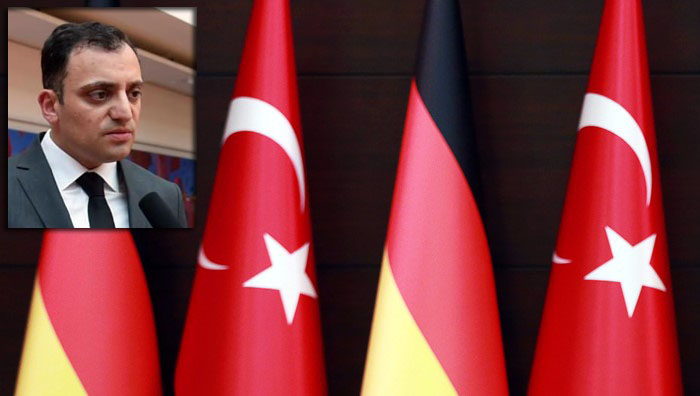 A spokesperson in Turkish Embassy in Berlin said on Saturday that Turkish President Recep Tayyip Erdoğan does not necessarily need an approval of German government to address Turkish citizens in the consulate.

Speaking to German Reinischen Post website (RP online) on Saturday, Embassy Press Counsellor Refik Soğukoğlu said “an approval from the German government is not needed for an appearance of the President in a Turkish consulate general.”

Amid a war of words between Ankara and Berlin over Erdoğan’s possible rally in Germany during G-20 summit on July 7-8, Turkish authorities said Erdoğan’s address to the Turkish community is “not on his official schedule yet.”

“Our president’s Germany schedule has still not yet been completed and so far there is no item such as a public address on his schedule. It is true that such an invitation has been made, but there isn’t any fixed program other than the president’s contacts within the framework of the G20 summit,” Turkish presidential sources told Hürriyet daily on Thursday, speaking on condition of anonymity.

Ankara’s statement came after German Foreign Minister Sigmar Gabriel voiced disapproval of a political rally held by Erdoğan and implied that Chancellor Angela Merkel was of the same view.

Earlier on Thursday, Martin Schulz, the Social Democrat candidate for chancellor of Germany, called for a ban on Erdoğan’s planned political rally in Germany.

After a crisis between Turkey and the US over Erdoğan’s security detail attacking protesters in Washington, D.C., last month, Hamburg police have warned the guards not to attack protesters during a G-20 summit in Hamburg on July 7-8.

German officials are concerned about increased tension and clashes between pro-Erdoğan supporters and Kurdish nationalists around the G20 summit.

Relations between Turkey and Germany have deteriorated over the past year due to the blocking of a campaign in Germany for a referendum in Turkey, Erdoğan’s repeated emphasis on reintroducing the death penalty, Germany’s granting of asylum to military officers and diplomats who are accused of a failed coup attempt and human rights abuses in Turkey, including the arrest of two German-Turkish journalists.