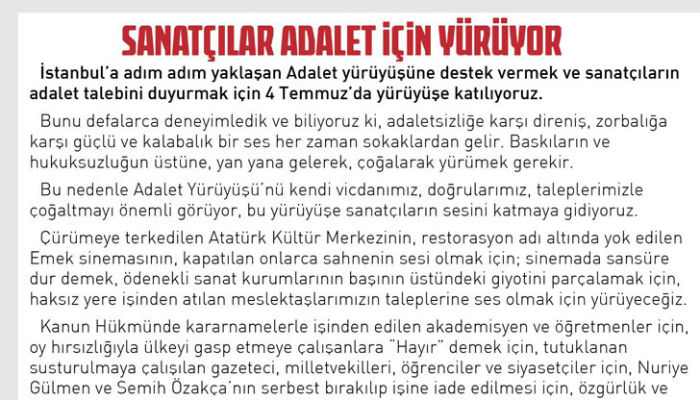 Turkish actor Mert Fırat announced on Friday that a group of artists will take part in a march launched by main opposition Republican People’s Party (CHP) leader Kemal Kılıçdaroğlu in Ankara on June 15 to demand justice.

Kılıçdaroğlu launched the “March of Justice” in protest of the arrest of CHP deputy Enis Berberoğlu. The march is expected to last for 25 days and end at Maltepe Prison in İstanbul where Berberoğlu is jailed.

Berberoğlu was sentenced to 25 years in prison on June 14 for leaking information for a report on National Intelligence Organization (MİT) trucks transporting weapons to jihadists in Syria.

Fırat shared a declaration from his Twitter account that said: “In order to give support to the March of Justice, which gets closer to İstanbul step by step and make the artists’ demand for justice be heard, we are joining in the march on July 4.”

“We have experienced this many times and know that resistance against injustice, a strong and loud voice against oppression, always comes from the streets. We need to stand against pressure and unlawfulness by coming side-by-side and walking in great numbers,” says the declaration.

The declaration also calls on all professional, semi-professional and amateur artists as well as their readers and audience to participate in the march and to register by July 2.