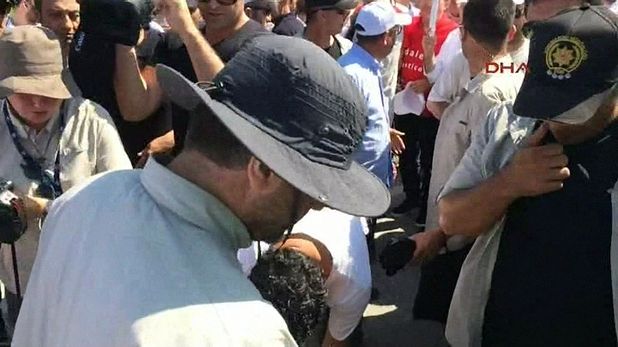 On the 14th day of a “March of Justice” launched by main opposition Republican People’s Party (CHP) leader Kemal Kılıçdaroğlu, a bullet was found on the side of a road shortly after Kılıçdaroğlu and the participants of the march began walking in the northwestern province of Düzce on Wednesday morning, the Hürriyet daily has reported.

A participant of the march was quoted as saying that the bullet was fired from a car passing by.

In a statement he made before continuing the march on Wednesday, Kılıçdaroğlu warned against provocations and said the participants of the march should only applaud when they are faced with criticism or protests.

Kılıçdaroğlu initiated the march in Ankara on June 16 in protest of the arrest of CHP deputy Enis Berberoğlu, who was sentenced to 25 years in prison on June 14 for leaking information for a report on National Intelligence Organization (MİT) trucks transporting weapons to jihadists in Syria.

The march, which started in Ankara, will last for 25 days and end at Maltepe Prison, where Berberoğlu is jailed.

In a similar incident on Tuesday, an unidentified person dumped a truckload of manure near CHP March of Justice camp in Düzce, sparking anger among CHP supporters.