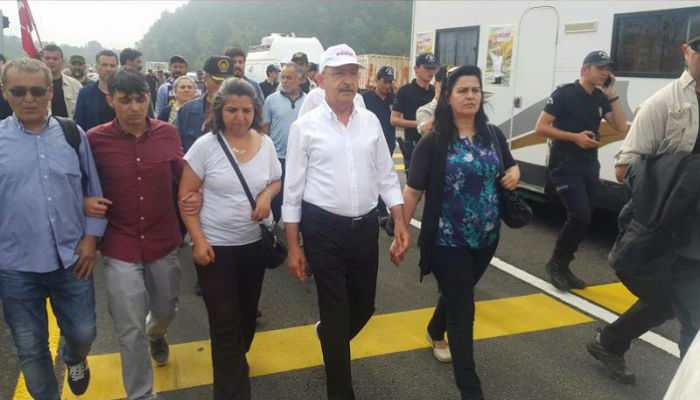 On the 13th day of a “March of Justice” launched by main opposition Republican People’s Party (CHP) leader Kemal Kılıçdaroğlu in protest of the arrest of a party deputy, the families of some individuals who were killed during 2013’s Gezi Park protests participated in the march.

The Gezi Park protests were sparked in the summer of 2013 in protest of government plans to demolish Gezi Park in İstanbul’s Taksim neighborhood. The protests turned into anti-government demonstrations all across Turkey due to the police’s use of violence against the protestors. At least 11 people were killed due to police violence during the protests.

Kılıçdaroğlu initiated the march in Ankara on June 16 in protest of the arrest of CHP deputy Enis Berberoğlu, who was sentenced to 25 years in prison last week for leaking information for a report on National Intelligence Organization (MİT) trucks transporting weapons to jihadists in Syria.

The march will last for 25 days and end at Maltepe Prison, where Berberoğlu is jailed.

In the meantime, Kılıçdaroğlu, who held a news conference before continuing the march on Tuesday, said his party has issued instructions against provocations during the march.

A total of 220 kilometers have been covered during the march so far.