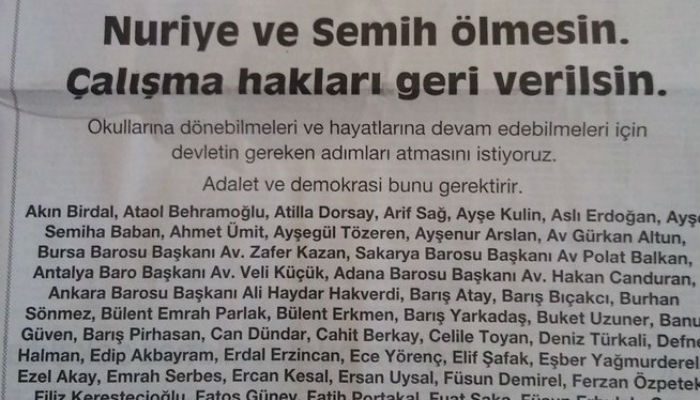 On the 111th day of a hunger strike launched by two academics, Nuriye Gülmen and Semih Özakça, who were fired from their jobs in the aftermath of a failed coup attempt on July 15, 2016, 111 prominent figures in a newspaper ad on Tuesday called on the government to take action to save the academics from dying.

The newspaper ad, which was published by the Hürriyet, Cumhuriyet, Birgün and Evrensel dailies, noted that the health of Gülmen and Özakça has reached a critical level.

“Nuriye Gülmen and Semih Özakça are only two of the 5,000 academics, 50,000 teachers and 150,000 public workers who were removed from their jobs by an OHAL [emergency rule] decree. They were jailed because they launched a hunger strike demanding to be reinstated to their jobs. They have been hungry for 111 days. Don’t let Nuriye and Semih die. Reinstate their right to employment. We want the state to take the necessary steps so that they can return to their schools and continue their lives. Justice and democracy require this,” says the newspaper ad.

Gülmen and Özakça were on a hunger strike when they were arrested on terror charges on May 23 in Ankara in the wake of a botched coup attempt in Turkey on July 15, 2016.