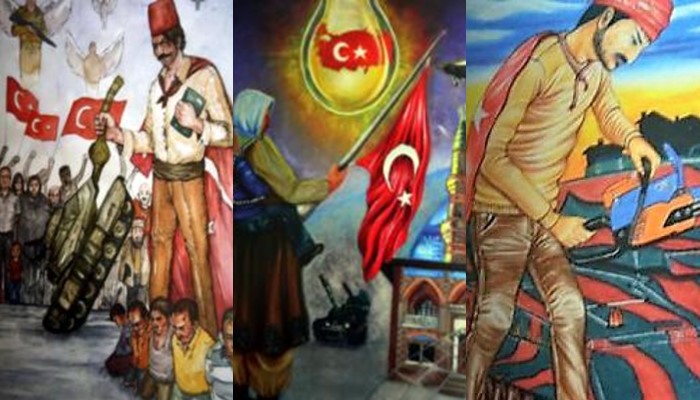 A drawing contest focusing on a July 15 coup attempt in Turkey for students from fine arts high schools has produced images of Turkish Islamic cleric Fethullah Gülen with devil ears, the Cumhuriyet daily reported on Sunday.

The Turkish Ministry of Education compiled a book of the drawings of high school students who depicted Gülen, who is accused by the ruling Justice and Development Party (AKP) of masterminding the coup attempt, with devil ears and as a puppet.

Another drawing was of a Turkish flag in the background with the nation as a fist pointed towards Gülen.

Students also drew images of a soldier on bended knee, captured tanks and the Turkish flag with the AKP symbol.

The Ministry of Education also organized poetry and composition competitions featuring the failed coup attempt. The drawing contest, named “From coup to democracy: July 15,” was participated in by fine arts high school students from 58 cities.

According to a report by the state-run Anadolu news agency on May 28, 154,694 individuals, including journalists, teachers, judges, prosecutors, police and military officers, academics, governors and businessmen have been detained and 50,136 have been jailed due to alleged Gülen links since the failed coup attempt.