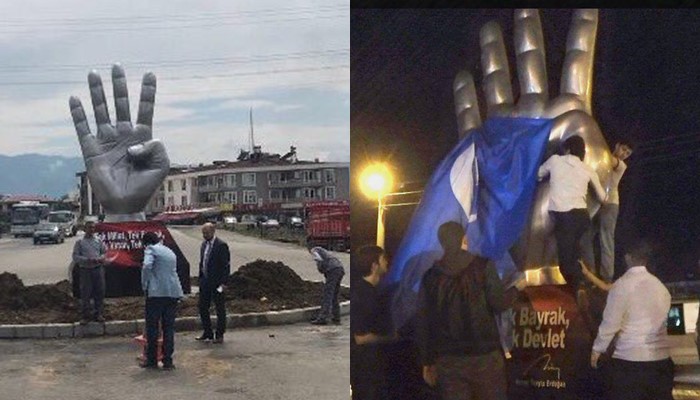 Members of Turkish nationalist movement the Grey Wolves (Ülkü Ocakları) on Wednesday night held a demonstration in the northwestern Turkish province of Düzce in protest of the erection of a statue giving the Rabia sign by the  Düzce Municipality.

“We are against the presentation of the Rabia sign, a sign belonging to Muslim Brothers in Egypt, as nationalist symbol. If the mayor of Düzce wants to put a national symbol here, it should be either a grey wolf or double-headed eagle,” said Fatih Gülaçtı, provincial head of Ülkü Ocakları, in a press statement after covering the Rabia sign statue with an Ülkü Ocakları flag.

“Rabia is not our symbol. This weird structure, which was erected for political show, must be removed as soon as possible,” added Gülaçtı.

Turkish president and leader of Turkey’s ruling Justice and Development Party (AKP) Recep Tayyip Erdoğan has long been using the Rabia gesture, which was first created by former Egyptian President Mohamed Morsi and Muslim Brothers against Egyptian President Abdel Fattah Al-Sisi, who assumed rule of the country with a military intervention in 2013, during his speeches where he declared his motto: One Nation, One Flag, One Homeland and One State.