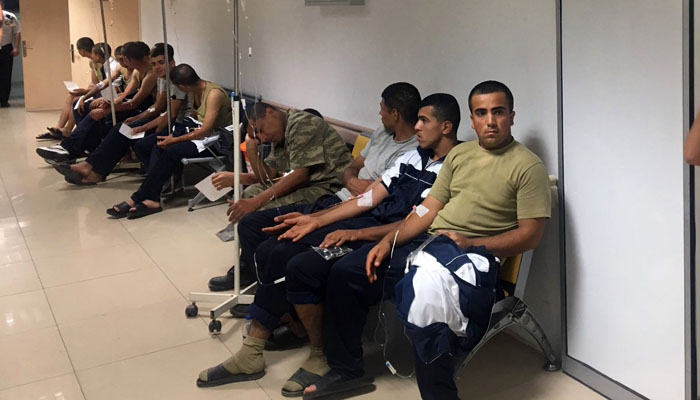 The Turkish Ministry of Health has announced that soldiers who were hospitalized at the end of May in Manisa province due to suspected food poisoning had contracted salmonella, the Cumhuriyet daily reported on Thursday.

According a statement from the ministry, investigations into the food poisoning of more than a thousand soldiers in Manisa during the last couple of weeks are still ongoing, while the cause of the food poisoning in May was found to be the salmonella bacteria.

The Diken news website also said the Ministry of Health had announced the cause of the soldiers’ hospitalization to be food poisoning. The ministry has completed its preliminary investigation and relying on clinical symptoms, samples from the hospital and the results of epidemiological analysis it was determined that the soldiers were poisoned by food.

The Manisa mayor’s office suggested that the soldiers were not poisoned by food but were psychologically affected by each other.

Forty people, including the general manager of a catering firm, have been detained in relation to the food poisoning of soldiers during the last couple of weeks.

The Manisa Chief Public Prosecutor’s Office said in a statement earlier this week that the number of detentions had reached 40 and that some employees of Rota Catering were also detained after the fourth food poisoning incident at the military base in Manisa.

Rota Catering’s general manager, with whom the company parted ways due to the food poisoning incidents, was detained in Ankara on Wednesday.

An employee of Rota Catering said they were using food that should have been thrown away for the soldiers’ meals and that soldiers were poisoned because of the spoiled ingredients. According to the employee of the firm, the Provincial Directorate of Agriculture was unable to inspect the catering company because it is situated on the military base.