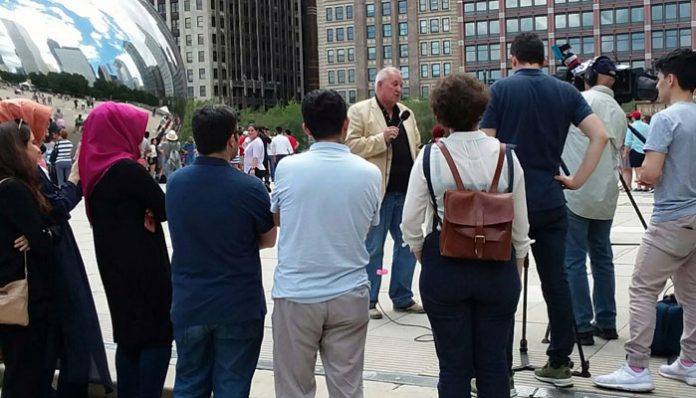 A group of young people whose fathers are jailed in Turkey as part of a government crackdown on dissidents gathered at Cloud Gate, Millennium Park Chicago, for Father’s Day and said they would have sent books as gifts to their fathers if there were no prohibitions against it in Turkish prisons.

At a press briefing in front of Cloud Gate, a group of youngsters whose fathers are in jail in Turkey said thousands of people in Turkish prisons have been deprived of not only their liberty but also their most basic human and civil rights.

“They are not allowed to exchange letters with their loved ones. Even sending a book to prison is forbidden,” said a statement read by group spokesman Buzz Hunter, a teacher and a volunteer supporter of the Huddled Masses, the organizer of the event.

The group also distributed a book titled “End Game” by jailed Turkish journalist and writer Ahmet Altan, saying they would have sent their fathers the book by Altan, who is also a father and is in the same prison as some of their fathers.

“Ahmet Altan, who was arrested on completely baseless accusations like our fathers, said in his message sent from prison: I am happy and hopeful in the prison of a country where the courts have turned into legalized slaughterhouses. My confidence in people and in humanity has never been shaken and never will. Whatever happens, I will continue to live my life happy and hopeful in prison because of my trust in them.

“We, like Altan, continue our lives in the light of hope that someday we will have human rights, due process, freedom, democracy and fatherhood,” the statement said.

Underlining their deep concerns about their loved ones back in Turkey, the group said people who are related to Turkey purge victims in jails, including their mothers, sisters and brothers, are being threatened with detention, serious harassment and dismissal from their jobs.

“We are talking about a country where even little children face harassment in their schools and struggle with depression and other mental health issues,” they added.

The groups left copies of the book by Altan for people there and said, “On this Father’s Day, we are leaving the books here for people to take home and read, books we cannot send to our fathers.”

Huddled Masses was established by US-based followers of the Gülen movement, also known as the Hizmet Movement, a global civil society movement inspired by the views of Turkish Islamic scholar Fethullah Gülen, who is accused by the Turkish government and President Recep Tayyip Erdoğan of masterminding a failed coup last summer.

Despite Gülen having denied the accusations, the Turkish government and Erdoğan launched a widespread purge aimed at cleansing sympathizers of the movement from within state institutions, dehumanizing its popular figures and putting them in custody.

Over 138,000 people have been dismissed from their jobs, more than 106,000 were detained and nearly 53,000 jailed over alleged links to the movement, according to a tally by TurkeyPurge.com.