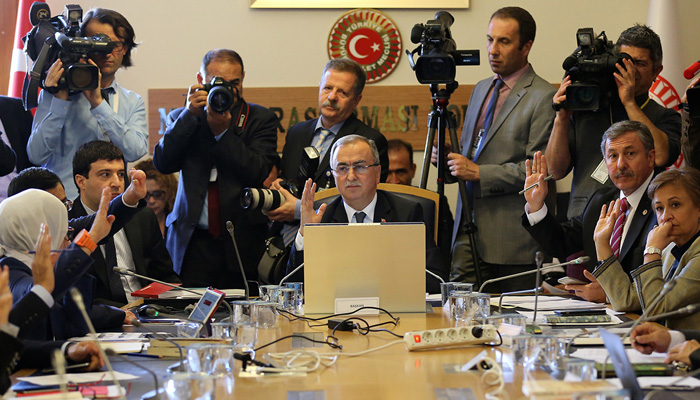 The opposition Peoples’ Democratic Party (HDP) and Nationalist Movement Party (MHP) announced on Monday that they have lodged a dissenting opinion to a parliamentary commission report on a failed coup last summer over its shortcomings and contradictions in explaining the stages of development of the coup and the role of those who were accused of involvement.

Announcing their dissenting opinion at a press conference on Monday, HDP Mardin deputy and member of Turkey’s parliamentary Coup Investigation Commission Mithat Sancar said “There is still confusion as to when and how President [Recep Tayyip Erdoğan] learned about the coup [on the night of July 15, 2016].”

Underlining that Chief of General Staff Gen. Hulusi Akar also made contradictory statements concerning his whereabouts on the night of the coup, Sancar said: “it needs to be clarified whether some negotiations took place between the government and the putschists when Akar was taken from the Akıncı Air Command to the Çankaya palace (the prime minister’s office in Ankara) in a helicopter.”

While the events on the night of the coup attempt have yet to be fully uncovered, Erdoğan has repeatedly complained about an intelligence failure, saying he only learned about the putsch from his brother-in-law on the night of July 15.

Erdoğan’s contradictory statements concerning when exactly he first heard about coup attempt turned into a heated debate among opposition circles after the coup.

Meanwhile, MHP Muğla deputy and member of the parliamentary Coup Investigation Commission Mehmet Erdoğan also held a press conference on Monday over his party’s dissenting opinion on the report by the commission.

Noting that the ruling Justice and Development Party (AKP) launched a widespread purge of followers of the Gülen movement, which the AKP and Erdoğan accuse of being behind the failed coup, in almost all state institutions, the MHP’s Erdoğan said “it’s funny” that no proper investigation was launched into politicians, including AKP deputies, who were possibly involved in the failed coup.

According to Erdoğan, the coup commission report lacks a detailed investigation into AKP deputies who previously supported the views of Fethullah Gülen, the inspiration of the Gülen movement, popularly known as Hizmet.

The military coup attempt on July 15 killed over 240 people and wounded more than a thousand others. Immediately after the putsch, AKP government along with President Erdoğan pinned the blame on the Gülen movement.

While Gülen strongly denied having any role in the failed coup and called for an international investigation into it, AKP government initiated a widespread purge aimed at cleansing sympathizers of the movement from within state institutions, dehumanizing its popular figures and putting them in custody.