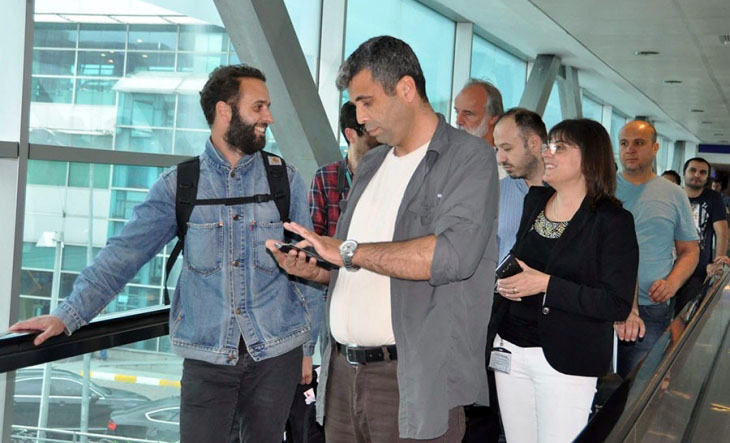 French photojournalist Mathias Depardon, who was detained on May 8 in Turkey, deported from in a plane from İstanbul’s Atatürk Airport to France after his release on Friday.

French photojournalist Mathias Depardon, who was detained on May 8 in Turkey, will be deported on Friday, Christophe Deloire, secretary-general of Reporters Without Borders (RSF), announced on Friday.

Doğan news agency shared a video of Depardon at an İstanbul airport, saying the French journalist was taken to the airport by two police officers for deportation. Depardon deported to France on a plane at 19:20 local time.

“Mathias Depardon is on a plane from Gaziantep to İstanbul. He should be back in Paris this evening,” said Christophe Deloire, secretary-general of Reporters Without Borders (RSF), in an earlier Twitter message.

Daniele Van de Lanotte, Depardon’s mother, was allowed to visit her son in Gaziantep on Thursday.

During a meeting on May 25 in Brussels, Erdoğan promised Macron that he would quickly examine the case of Depardon.

Detained on May 8 in Turkey’s southeastern Batman province while on assignment for National Geographic, Depardon has been awaiting his deportation from Turkey.

Accused of disseminating the propaganda of the outlawed Kurdistan Workers’ Party (PKK) on social media, Depardon was released by a Turkish court and was taken to the Gaziantep Immigration Authority in the Oğuzeli district of Gaziantep province for deportation.

Depardon went on a hunger strike on May 21 while waiting for his deportation from Turkey but ended his protest on May 27 when he learned a consular visit would be allowed.

Pressure on foreign journalists in Turkey has been mounting in recent years, with the government, pro-government journalists and government trolls on social media directly targeting them.

On April 9, Gabriele del Grande, an Italian journalist working for the ANSA news agency, was detained during a security check in the southern province of Hatay. He was released by a Turkish court on April 25.

Del Grande was interviewing Syrian refugees for a book he is writing about the war and the rise of the Islamic State in Iraq and the Levant (ISIL).

In the last days of 2016, Wall Street Journal correspondent in İstanbul Don Nissenbaum was held incommunicado for over two days for tweeting about an alleged soldier burning by ISIL.

In January The New York Times reported that Turkey denied entry to one of its veteran reporters, Rod Nordland, at İstanbul Atatürk Airport, with no reason offered by officials as to why he was not allowed to enter the country.

Deniz Yücel, who works for the German Die Welt newspaper and has been kept in pre-trial detention in Turkey since Feb. 27 as part of an investigation for publishing stories on the leaked emails of President Recep Tayyip Erdoğan’s son-in-law and Energy Minister Berat Albayrak, was arrested by a court on Feb. 27.

Journalists Frank Nordhausen and Nick Ashdown were targeted by pro-government trolls and media for their tweets reporting on twin bomb attacks in İstanbul immediately after they occurred on Dec. 10.

After CNN’s Ivan Watson was detained during a live broadcast from the Gezi Park protests in Istanbul in 2013, Erdoğan accused him of “working like a spy.”

Erdoğan also went after the Economist’s Turkey correspondent, Amberin Zaman, for her remarks on a TV show: “Shameless militant disguised under the name of a journalist.”

Selin Girit, a host on the BBC’s Turkish service, was another journalist targeted by Erdoğan, who said, “Part of a conspiracy against her own country.”

Two Swedish journalists were also temporarily detained by police in November in the Kurdish southeastern province of Diyarkabır.

Lindsey Snell, an American freelance journalist detained by Turkish security forces on Aug. 7 as she crossed into Turkey from Syria and accused of having illegally entered a restricted military zone, was released in October after two months’ detention in Turkey.

Finnish journalist and writer Taina Niemela was deported from Turkey in April on charges that she had been involved in “spying activities.”