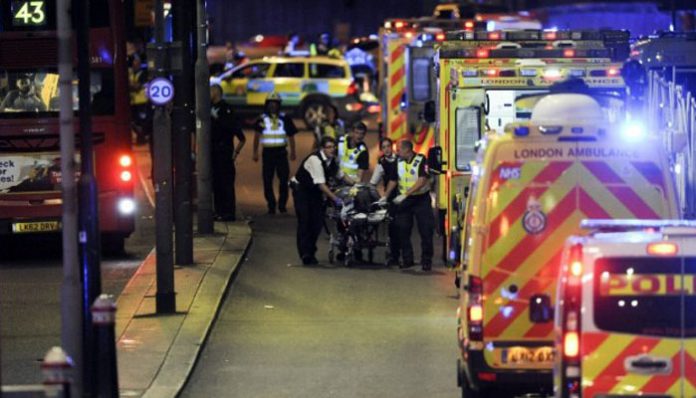 Turkey condemned a terrorist attack in London on Saturday night that killed seven people and injured nearly 50 and expressed solidarity with British people.

In a statement on Sunday, Turkish Foreign Ministry condemned the “inhuman terrorist attacks in the strongest possible terms”.

“Turkey and the Turkish people, who unfortunately have a profound experience of such attacks, understand and share the pain of the people of the United Kingdom,” the statement read.

Turkish Foreign Minister Mevlüt Çavuşoğlu said in a tweet on Sunday morning that “Baghdad, Kabul and now London. We condemn terrorism wherever it happens. We shall defeat it by joint fight.”

Turkey’s EU Affairs Minister Ömer Çelik also strongly condemned the attack in a tweet on Sunday “Strongly condemn the London terror attack. My thoughts are with the victims. We stand united with the UK against all sorts of terror,” Çelik also tweeted.

Terror attack in London began late on Saturday night, when three men in a white van run into crowds of pedestrians on London Bridge and stabbed people in Borough Market area after jumping out of the van. Three terrorists were killed after UK police fired number of rounds at them because they were wearing what appeared to be suicide belts.

The suspects are then believed to have jumped out the van and proceeded on foot towards the nearby area of Borough Market, one of the capital’s most popular nightlife spots.

Following the terror attack, British Prime Minister Theresa May said on Sunday the UK would review its anti-terrorism strategy and said “It is time to say enough is enough.”