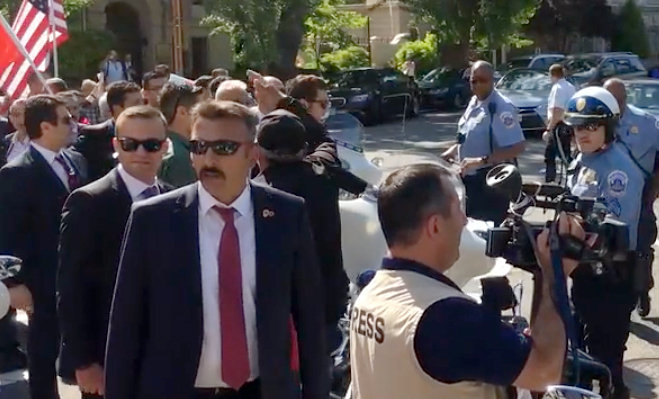 The US sale to Turkey of $1.2 million in semiautomatic handguns for use by its security force appears to be in jeopardy due to strong resistance by members of Congress sparked by a vicious attack on protesters in Washington last month perpetrated by that same security force.

The US State Department gave congressional leaders informal notification of the proposed sale on May 15, according to a report on Thursday by The New York Times.

The next day, after Turkish President Recep Tayyip Erdoğan met with Donald Trump at the White House, members of Erdoğan’s security detail were caught on video violently attacking a group outside the Turkish ambassador’s residence on Sheridan Circle who had gathered to protest the Turkish president’s policies. Footage also shows Erdoğan apparently giving the order for the attack and watching the incident unfold from his car.

Eleven people, among them US citizens, were injured in the confrontation, some of them seriously.

The brutal beatings prompted a volley of criticism from both sides of the aisle in Congress, ranging from a demand to prosecute the guards who carried out the attack to declaring Turkey’s ambassador to the US persona non grata and forcing him to leave the country.

Although the State Department has not yet notified Congress if it intends to withhold a license for the sale, the resistance it has met from lawmakers could stall or even sink the transaction.

“The attack has presented the State Department with a particularly thorny challenge, as it balances geopolitical interests with domestic concerns in coordinating a response. American lawmakers have demanded the guards be held to account, while Turkey, a NATO ally and an active partner in the fight against the Islamic State, has all but denied the guards’ role in the skirmish. Several videos show the guards, many with pistols under their jackets, beating protesters,” said the Times report.

Senator Ben Cardin of Maryland, the top Democrat on the Foreign Relations Committee, wrote to the State Department after the melee outside the ambassador’s residence expressing concern about the sale. Likewise, Rep. Edward Royce, chairman of the House Foreign Affairs Committee, called on the department to block the sale, saying that “many committee members remain deeply concerned about this incident, as evidenced by our passage last week of House Resolution 354, which notes the unprofessional and brutal conduct of the Turkish security forces.”

Although the State Department has issued statements condemning the attack and summoned Turkish Ambassador Serdar Kılıç to protest the incident, it is under pressure from lawmakers to take further action, especially after a bipartisan resolution was introduced in the House last week condemning the attack and calling for the security officials involved to be charged and prosecuted.

The proposed transaction involves the sale of 1,600 semiautomatic pistols by firearms maker Sig Sauer of New Hampshire to the Turkish Mechanical and Chemical Industry Corporation (MKE), which would then resell the weapons to the Department of Security of the Presidency of Turkey, which is charged with protecting the president.

Footage from the attack on the protesters in May shows many of the guards armed with handguns and that at least 24 men, most of them Turkish security officials from Erdoğan’s security detail, were involved in the incident.