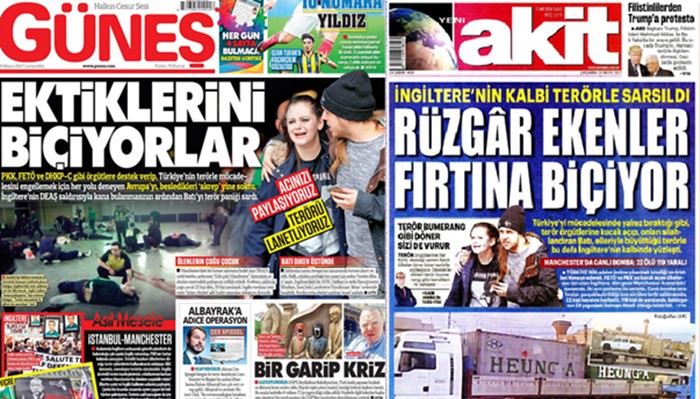 Two staunchly pro-government Turkish newspapers, Güneş and Yeni Akit, have accused the UK of supporting the Islamic State in Iraq and the Levant (ISIL) and said the country was hit by the ISIL it has nurtured in Manchester on Monday night.

The ISIL attack, which took place at the Manchester Arena at the end of a concert by US singer Ariana Grande, claimed the lives of 22 people, some of whom were children.

In its front page story on Wednesday, Güneş said: “They [the UK] are reaping the harvest of what they have sown.”

The daily said: “The scorpion nurtured by Europe, which supports terror groups such as the PKK [outlawed Kurdistan Workers’ Party], FETÖ [a derogatory term used by the Turkish government and its supporters to refer to the faith-based Gülen movement] and DHKP/C [Far-left Revolutionary People’s Liberation Party/Front] and tries every means to obstruct Turkey’s fight against terrorism, has again stung it.”

Güneş said Western countries have been overwhelmed by the panic of terrorism after the UK was drenched in blood by the ISIL attack.

Güneş is one of the newspapers owned by pro-government businessman Ethem Sancak, who was recently elected to Erdoğan’s ruling Justice and Development Party’s (AKP) Central Decision and Executive Board (MKYK).

The Islamist Yeni Akit daily also covered the Manchester attack in its main story on Wednesday with the headline “Those sowing the wind are reaping the whirlwind.”

“The West, which has not only left Turkey alone in its fight against terror organizations but also embraced and armed them, has faced terrorism, which it nurtured, at the heart of the UK this time,” said Yeni Akit.