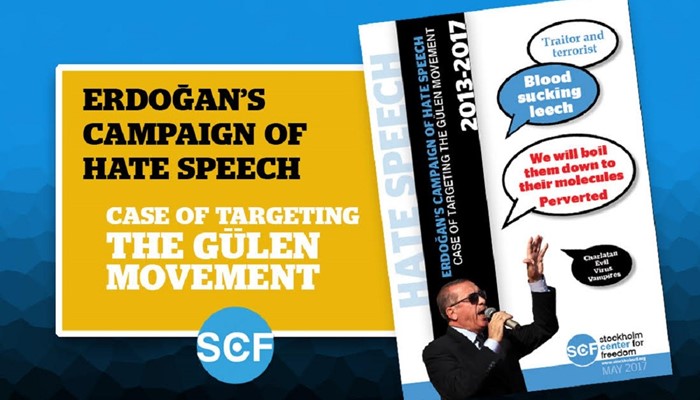 The negative feelings towards minorities, vulnerable groups, opposition figures and foreigners in today’s Turkey are being aggravated by the country’s authoritarian leader, Recep Tayyip Erdoğan, who engages in hate speech daily, giving rise to the discrimination and stigmatization of millions of people in Turkey and around the world, said the Stockholm Center for Freedom (SCF) in conjunction with a report it released on Monday.

Erdoğan keeps promoting hatred in a systematic and deliberate manner when targeting his opponents, setting an example for his followers to enlarge upon the hurtful narrative. In many cases, already disenfranchised ethnic and social groups in Turkey are being beaten down by thugs who emulate Erdoğan’s pattern of vile remarks, said SCF.

Kurds, Alevis, members of the Gülen movement, Christians, Jews, foreigners and many others declared pariahs and enemies by Erdoğan at one time or another have received their share of bitter verbal attacks by Erdoğan and his associates. The government-controlled media have perpetuated this hatred with fake and fabricated stories conveyed to a larger audience.

The most worrisome aspect of this campaign is that it has resulted in real consequences in the rise in hate crimes such as vigilante attacks in the case of tourists when Erdoğan targeted foreign countries. What is more, it has led to the justification of torture and abuse of victims by government officials in detention centers and prisons because they were declared pariahs by the nation’s number one official.

“Erdoğan represents the single most effective perpetrator of hate speech in today’s Turkey, and he acts with complete impunity,” said Abdullah Bozkurt, the president of SCF.

“With the rule of law no longer existing in the country, Erdoğan’s debilitating and ugly slurs marginalizing millions get a free pass,” he added.

SCF has reviewed Erdoğan’s public speeches delivered in the last three years to uncover a pattern and identify insults and hateful narrative that targeted the Gülen movement.

This peaceful civic movement has received the brunt of firebrand Erdoğan’s hurtful utterance of words such as “terrorists,” “traitors,” “vampires,” “leeches,” “tumor,” “virus” and more.

Having developed a unique vocabulary of 240 hateful slurs and insults that singled out the Gülen movement, Erdoğan eventually declared that the participants of the movement “have no right to life.”

When compared with other groups or countries targeted by Erdoğan, astonishingly similar words have been used. The unrelenting attacks against the Holy See, the Netherlands and Germany during a referendum campaign in March and April resemble the narrative Erdoğan has employed against the Gülen movement, according to SCF.

By doing so, Erdoğan and his cronies not only violate Turkish law but also infringe upon Turkey’s commitments under international conventions. SCF calls on Turkey to tackle the hatred and prejudice that are now in the open. It could destroy the social fabric of Turkey and eventually destroy Turkish society, spilling over to other countries that host large Muslim and Turkish communities.

It is time for Turkey’s international partners and allies to confront the thuggish behavior of the Turkish president and tell him that his behavior will no longer be condoned or tolerated, said SCF.