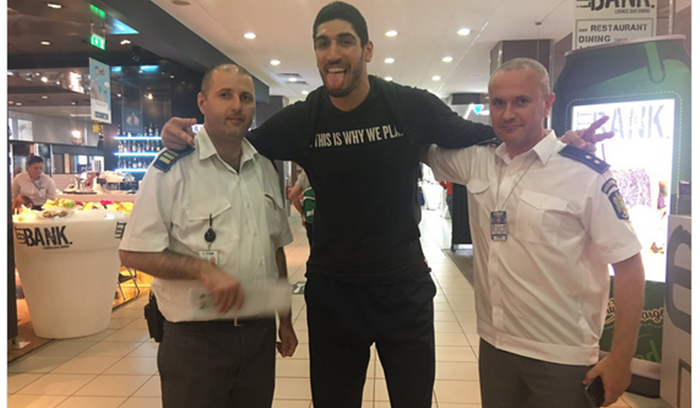 Oklahoma City Thunder center Enes Kanter, whose passport was seized by Romanian police at Henri Coanda Airport on Saturday upon a request from the Turkish government, will return to the US, saying he will hold a press conference in New York on Sunday.

“All good baby! Gonna give press conference tomorrow in NY. Got lots of things to say with lots of crazy stories. Be ready!!! Ohhh Yeeahhh,” Kanter tweeted seven hours he first tweeted that his passport was seized by Romanian police on Saturday.

The New York Times reported earlier that Kanter was released from the airport in Bucharest and has landed safely in London.

Kanter said in a 45-second video that he had been held at the airport for hours on the grounds that his passport had been canceled by the Turkish government due to his “political views.”

“The guy who did this, you know, is Recep Tayyip Erdoğan. [He is] the president of Turkey. You guys know him by his attack on people in Washington, DC. He is a bad man. He is a dictator. He is the Hitler of our century. I will keep you posted. Just pray for us,” Kanter said.
The Turkish government has been trying to confiscate more than 50,000 passports including those held by relatives of journalists living in exile.

Twenty-four-year-old Kanter is one of the most famous Turkish basketball players in the NBA. His family disowned him after he pledged support to Turkish Islamic scholar Fethullah Gülen, who the Turkish government says was behind a failed coup in Turkey on July 15.

Oklahoma Governor Mary Fallin officially declared Oct. 29, 2016 “Enes Kanter Day” for the professional success of the Oklahoma City Thunder player and his dedication to civic organizations in the state.

On April 20, Romanian police returned the passport of Soner Cesur, a Turkish businessman with investments in Romania, which they seized on March 25 upon a demand made by the Turkish government.

According to a story on the Romanyahaber news website, Cesur’s passport was seized by police at Henri Coanda Airport as he was attempting to fly to Warsaw. Police cited in a written document that the passport was seized upon an order from the Romanian Foreign Ministry.

The seizure of passports started overseas in early 2016. In June of that year the passport of Nevin İpek, Koza İpek Holding CEO Akın İpek’s wife, was canceled after it was allegedly reported lost by someone other than herself.

On Sept. 28 the passport of former Today’s Zaman reporter Arslan Ayan was confiscated by officials at the Turkish Consulate General in New York on the grounds that a warrant for his detention was outstanding back in Turkey.

Last year, Belgian police returned the passport of a Turkish citizen since the cancellation of passports by the Turkish government after a July 15 failed coup in Turkey was considered unlawful. (Parts of this story originally appeared on Turkey Purge)