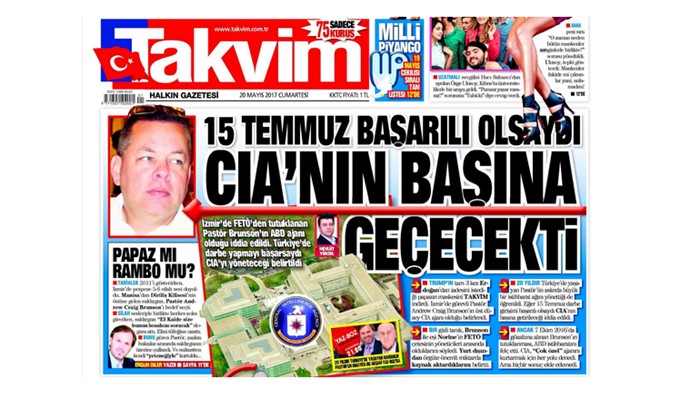 The pro-Erdoğan Takvim daily on Saturday accused jailed American pastor Andrew Brunson, whose release US President Donald Trump sought from Turkish President Recep Tayyip Erdoğan on Tuesday, of being behind a coup attempt in Turkey on July 15, claiming that he would be the CIA chief if the coup attempt had been successful.

According to the top story on Takvim’s front page, Brunson is a “high-level CIA agent” and also a “high-level member of the Gülen movement,” which Erdoğan has labeled as a terrorist organization and which he accuses of masterminding the failed coup attempt. The arrest of the pastor has paralyzed CIA operations in Turkey, according to the article, and the US has been exerting all means to save him.

Andrew Brunson, a North Carolina native, has been in custody since October after he and his wife were detained on immigration violation charges. At the time, the Brunsons were running a small Christian church in İzmir. They had lived in Turkey for 23 years.

Brunson’s wife, Norine, was soon released, but the pastor remained in custody and soon saw his charges upgraded to terrorism. Prosecutors have suggested in court hearings that Brunson is being held on suspicion of being a follower of Fethullah Gülen, a Muslim cleric living in self-exile in Pennsylvania and whose views inspired the Gülen movement.

Takvim’s editor-in-chief, Ergun Diler, who accompanied Erdoğan during his visit to Washington, D.C., last week, also published a column about Brunson with the title “Rambo Pastor,” claiming that the pastor got rid of an assassination attempt in 2011 in İzmir due to his agent training.

“Brunson was a ‘deep’ name, and he was influential not only in Turkey but all over the region,” Diler wrote and claimed the CIA would kill him in prison if they believed that Turkey would not deport him to the US.

According to CNN Türk, both Trump and US Vice President Mike Pence brought up the issue of Brunson’s release during a meeting between the Turkish and American delegations last Tuesday.

A statement released by the White House also said Trump asked for Brunson’s release three times and his immediate deportation to the US during the meeting with Erdoğan.

Brunson’s lawyer, Jay Sekulow, who met with Trump before the Erdoğan meeting, announced that Trump promised to rescue his client from jail.

Takvim is a daily of the Turkuvaz media group, which was run by Serhat Albayrak, brother of Berat Albayrak, energy minister and the son-in law of President Erdoğan.

A Haber, Sabah, ATV and Daily Sabah are among other media outlets of the group.