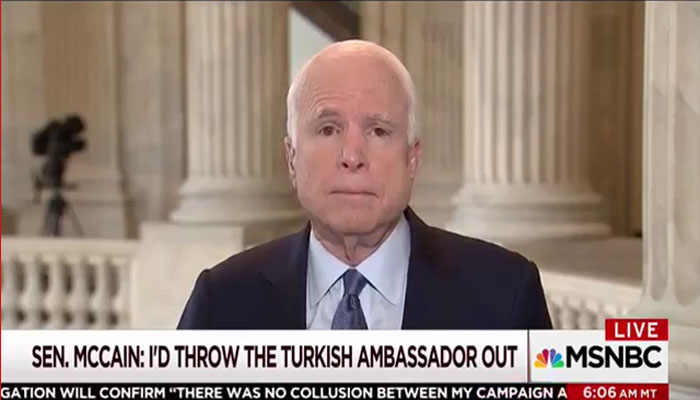 US Senator John McCain on Thursday urged the expulsion of Serdar Kılıç, Turkey’s ambassador to the United States, after a violent altercation between protestors and Turkish security personnel outside the envoy’s residence during a visit by Turkish President Recep Tayyip Erdoğan on Tuesday.

“We should throw their ambassador the hell out of the United States of America. This is the United States of America. This isn’t Turkey; this isn’t a Third World country, and this kind of thing cannot go unresponded to diplomatically,” said McCain, the head of the Senate Armed Services Committee, in an interview with MSNBC’s “Morning Joe” on Thursday, adding that legal action could also be pursued.

Police intervened in the fighting between the two groups, while a video recording posted on social media the same day also revealed that Erdoğan’s guards were involved, physically attacking the protesters. Eleven people were injured, with at least one of them in serious condition, according to US media outlets.

The Turkish Embassy on Thursday released a statement in which it held supporters of the outlawed Kurdistan Workers’ Party (PKK) responsible for the fracas.

“Groups affiliated with the PKK, which the US and Turkey have designated as a terrorist organization, gathered yesterday [on Wednesday] without permit in Sheridan Circle in the immediate vicinity of the ambassador’s residence, while the President of Turkey was visiting the residence. The demonstrators began aggressively provoking Turkish-American citizens who had peacefully assembled to greet the President. The Turkish-Americans responded in self-defense and one of them was seriously injured. The violence and injuries were the result of this unpermitted, provocative demonstration. We hope that, in the future, appropriate measures will be taken to ensure that similar provocative actions causing harm and violence do not occur,” the embassy said in its statement.

A State Department official said the Turkish security officials that were involved appeared to have been a mix of Turkish Embassy and Erdoğan’s security staff. After expressing concern about the “violent incidents involving protestors and Turkish security personnel,” Ambassador Kılıç was summoned by the department on Thursday to explain the incident.

Following the release of a statement by the Metropolitan Police Department on Wednesday saying that they intended to pursue charges against individuals involved in the altercation, DC Police Chief Peter Newsham reiterated at a press briefing that same day that “we intend to ensure accountability of anybody involved.”

Meanwhile, Rep. Ed Royce, chairman of the House Foreign Affairs Committee in the US Congress, sent a letter to Attorney General Jeff Sessions and Secretary of State Rex Tillerson urging immediate action to hold individuals accountable for the brutal attacks on peaceful demonstrators outside the Turkish ambassador’s residence on Tuesday.

“To send a clear message that these acts of violence will not be tolerated, I ask that you immediately look into this matter and bring all appropriate criminal charges before these individuals leave the United States. Agents of foreign governments should never be immune from prosecution for felonious behavior,” he said in the letter.