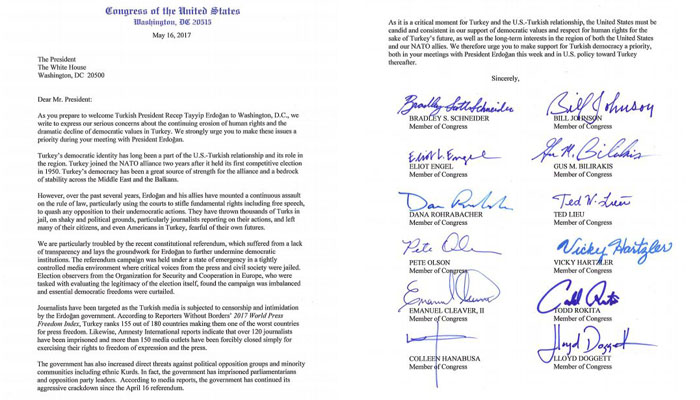 Members of the US Congress have sent a letter to President Donald Trump urging him to press visiting Turkish President Recep Tayyip Erdoğan on Turkey’s deteriorating human rights record.

In a letter addressed to Trump sent on Tuesday morning, just hours before his meeting with Erdoğan, 81 US Congress members said, “As you prepare to welcome President Recep Tayyip Erdoğan to Washington D.C., we write to express our serious concerns about the continuing erosion of human rights and the dramatic decline of democratic values in Turkey.”

Representatives Bradley S. Schneider and Bill Johnson are the sponsors of the letter.

The letter expresses serious concerns about recent democratic backsliding and the erosion of human rights in Turkey and urges Trump to prioritize these critical issues during his meeting with Erdoğan.

“Turkey is a NATO member and an important ally of the United States, especially in the fight against ISIS, which is why as friends, it is necessary we express our concern for the respect of democracy and human rights,” Schneider said in a statement on his congressional website.

“This meeting with Erdoğan is a unique opportunity for President Trump to send a clear message that civil liberties and the rule of law are vital to a functioning democracy and critical to the future of Turkey and the region.”

In the same statement, Johnson underlined that Turkey has historically been a reliable ally for the United States in an extremely volatile region, providing invaluable strategic support to counter threats such as communism and Islamic radicalism.

“However, sweeping human rights abuses and undemocratic practices under President Erdoğan are undermining this partnership, and posing enormous challenges for the United States. It is imperative that the Trump Administration urge the Turkish government to change course, and to abide by their commitments to human rights, democracy, and the rule of law.” he said.

The letter also underlined that journalists have been targeted as the Turkish media is subjected to censorship and intimidation by the Erdoğan government, and a recent referendum that expanded Erdoğan’s powers was held under a state of emergency in a tightly controlled media environment where critical voices from the press and civil society were jailed.

On April 16, 2017 Turkey held a constitutional referendum under a state of emergency in which opposition media and civil society representatives were tightly controlled and even imprisoned. Additionally, election observers from the Organization for Security and Co-operation in Europe (OSCE), who were tasked with evaluating the legitimacy of the election, found the election to be imbalanced and democratic freedoms curtailed. The outcome of the referendum resulted in significant expansion of executive powers in Turkey.

Prior to the constitutional referendum, Turkey’s democracy was under threat from restrictions on journalists and intimidation of members of the political opposition, and this has continued since April 16. According to Amnesty International, to date 120 journalists have been jailed and over 150 media outlets have been shuttered. In addition, the government has imprisoned parliamentarians and opposition party leaders and cracked down on ethnic minorities.

“As it is a critical moment for Turkey and the US-Turkey relationship, the United States must be candid and consistent in our support to democratic values and respect for human rights for the sake of Turkey’s future, as well as long term interests in the region of both the United States and our NATO allies. We therefore urge you to make support for Turkish democracy a priority, both in your meeting with President Erdoğan this week and in U.S. policy toward Turkey thereafter,” the letter said.