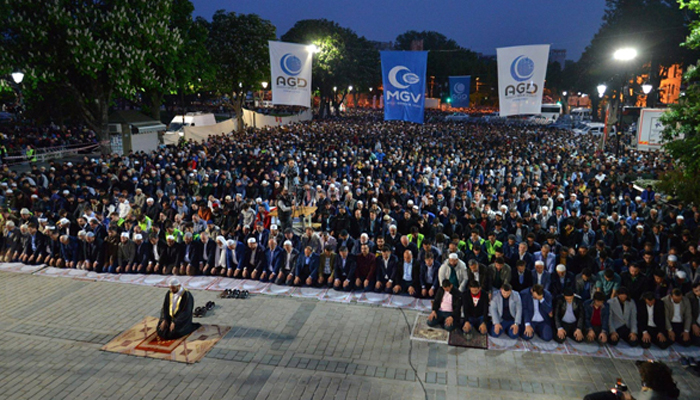 A large group of people from the pro-government Anatolia Youth Association (AGD) and National Youth Organization (MGV) gathered in front of İstanbul’s historic Hagia Sophia for morning prayer on Saturday and demanded that the museum be turned into a mosque again.

The crowd gathered in İstanbul’s Sultanahmet Square in front of Hagia Sophia at around 4 a.m. and chanted slogans such as “Break the chains, open Hagia Sophia” before the prayer.

Organizers from the MGV and AGD made speeches before the prayer and demanded the re-opening of Hagia Sophia as a mosque.

Built in 537 by Byzantine Emperor Justinian, whose rule stretched from Spain to the Middle East, Hagia Sophia — meaning “Divine Wisdom” in Greek — was unrivaled in the Christian world until Ottoman Sultan Mehmet II conquered the city in 1453 and turned it into a mosque. Mustafa Kemal Atatürk, the founder of modern Turkey, decreed it a museum in 1934.