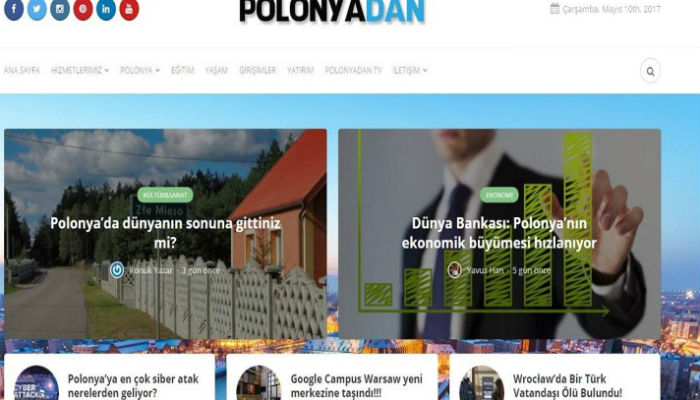 Turkey’s Consulate General in Warsaw has seized the passport of a Turkish national in Poland as part of a growing pattern of arbitrary refusal of consular services and unlawful seizure of passports of critics and dissidents abroad by Turkey’s embassies and consulates.

The Stockholm Center for Freedom (SCF), an advocacy group that monitors rights violations in Turkey, received a complaint from a Turkish national named Said Aburrahim Murat, who stated that his passport was seized and cancelled by the Turkish Consulate General in Warsaw with no justification.

Murat, the founder of Turkish website Polonyadan.com, which features stories about Poland, said his passport was seized by the consular officer during his visit to the Consulate General of Turkish Embassy in Warsaw on March 23, 2017. “They seized my passport for no reason. All they said was, ‘Your passport has been cancelled’,” Murat said. When he asked for an explanation, he was not given any response and consular officer simply kept silent.

Murat is a computer engineer who graduated from a university in Warsaw and has been living in Poland legally with his wife. He said he had lived in Turkey, the United States and Brazil before and had no criminal record at all. “When I checked the official criminal report in Turkey, I am clean [there] as well. There is no lawsuit against me,” he noted.

Murat filed a report about the incident at the Turkish Consulate with both Interpol and the United Nations. He said the cancellation and seizure of his passport disrupted his life as he is dependent on foreign travel as part of his employment in a company that does a large amount of international work.

“Everyone knows that seizing a passport and letting a citizen stay abroad without a passport is not legal. That’s why the Turkish Embassy does not want to give any reason to us. I send them emails, mail via the Polish Postal Services and petitions. They do not reply to any of them,” he explained.

SCF has been tracking a growing number of cases about the arbitrary refusal of consular services to Turkish citizen abroad in violation of the Vienna Convention on Consular Relations and its Optional Protocols (1963), the International Convention on the Protection of the Rights of All Migrant Workers and Members of their Families (1990) and the Convention on the Elimination of All Forms of Discrimination against Women (1979).

SCF President Abdullah Bozkurt has written an article on this practice by the Turkish government in which he said: “The undeclared policy being applied at Turkish consulates has victimized many Turkish nationals who are left without valid passports and unable to obtain official documents such as birth certificates and powers of attorney. Through the abuse of consular services in violation of Turkish law as well as international agreements, the persecution of vulnerable groups on the home front has now clearly spilled overseas. The practice differs from one consulate to another but ranges from outright refusal to serve Turkish citizens deemed disloyal to the regime of President Recep Tayyip Erdoğan to citing technical difficulties as an excuse not to render services.”

When probed on consular services on April 2016 by the UN Committee on Migrant Workers (CMW), which operates under the Office of the United Nations High Commissioner for Human Rights (OHCHR), Turkey said: “Regardless of the status of Turkish citizens living abroad such as ‘worker/employer’ or ‘asylum seeker/refugee,’ all acts related to their civil status, nationality, passport and notarial acts are carried out by the Turkish Consulates General and the Consular Sections of Embassies of the Republic of Turkey.”

That statement turns out to be false given the fact that so many reports SCF has received about the refusal of consular services by Turkish embassies and consulates to Turkish citizens living abroad. In one case, a Turkish citizen living in Paris was denied an affidavit for parental consent for processing a passport application for a family member back in Turkey. The consular office initially said the computer network were down so she could not process the affidavit. The consulate eventually said it would not grant the affidavit after the applicant made repeated inquiries over time. SCF decided to keep the applicant’s name confidential for safety reasons. In a similar case, another applicant in Washington, D.C., was denied notary services.

Turkish citizens living in Nigeria reported multiple cases of service denials by Turkish consulates for various services including birth registry and passport renewal. The Turkish Consulate General in Rome was also among those reported to have engaged in these unlawful practices. SCF received reports from Asian country Sri Lanka, where Turkish consular officers have started rejecting applications for all kinds of consular services from Turkish expatriates who are believed to be critical of Turkish President Recep Tayyip Erdoğan.

Among the most targeted include members of Hizmet movement, a civic group that was inspired by the US-based Muslim intellectual Fethullah Gülen, whose teachings focus on science education, volunteerism, community involvement and interfaith and intercultural dialogue. Gülen is a vocal critic of Erdoğan on pervasive corruption in the government and his support of armed radical jihadists in Syria.

Kurds, Alevis and leftist groups were also targeted in what appears to be a mass-scale persecution campaign perpetrated by the ruling Islamist-rooted Justice and Development Party (AKP) against government critics.

Journalist Ahmet Nesin was denied service at the Turkish Consulate in Geneva in April 2017. Nesin said on Twitter: “My passport has been stolen. I stopped by the consulate in Geneva yesterday. They did not give a passport. Instead, they offered me a document to return to Turkey where, they say, I will be arrested.”

SCF has learned that the consulates general are instructed by the Turkish capital to implement this undeclared policy of refusal of services to critics. Afraid of being named and shamed by Turkey’s partners and international organizations, consulates general are also ordered to decline requests by rejected applicants to receive a written document explaining why the services were denied. In one such case, an applicant told SCF that he asked for the name of the consular officer who engaged in such a practice, but the officer declined to reveal his identity. The officer also admitted that he was under strict instructions from the Turkish Foreign Ministry to not produce any document detailing the reasons for the refusal. (http://stockholmcf.org)