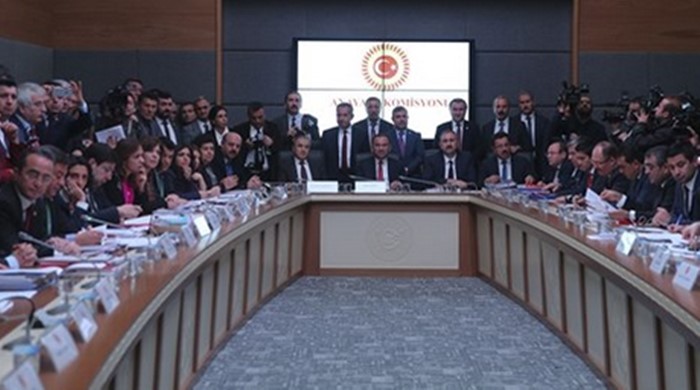 The main opposition Republican People’s Party (CHP) and the pro-Kurdish Peoples’ Democratic Party (HDP) have quit the parliamentary Justice and Constitution Commission, which gathered to name seven candidates for the Supreme Board of Judges and Prosecutors (HSYK) in accordance with a constitutional amendment voted in a referendum on April 16, DHA reported on Tuesday.

According to the report, commission members from the CHP and HDP left the chamber, saying they would not vote because the results of a referendum on April 16 were not legitimate. Twenty-one candidates were chosen out of 83 applicants to Parliament before the commission names the final seven.

Last week the CHP and HDP refused to send members to the parliamentary commission that is expected to name the candidates for the HSYK.

Bülent Tezcan, a CHP member of the Constitution Commission, said: “I don’t think we will contribute to a commission to establish a new unofficial judicial order through an unofficial order established as a result of an unstamped election [ballots]. Hence, as the CHP, we will not send a member to this commission.”

HDP deputy Mirhat Sancar also said they would not send members to the sub-commission for nominating names to the HSYK.

Both the CHP and the HDP applied to Turkey’s Supreme Election Board (YSK) for cancellation of the April 16 referendum. A decision by the YSK to change ballot validity criteria and accept unstamped ballots as valid on the day of the referendum was claimed by opposition parties to be evidence of fraud.

Rejecting the applications, the YSK announced the official results of the referendum on a constitutional reform package that introduces an executive presidency in Turkey, saying that 51.41 percent of the electorate voted yes, while 48.59 percent voted no.

After the Council of State also rejected a similar application, the CHP said it would apply to the European Court of Human Rights (ECtHR) demanding cancellation of the results of the referendum due to irregularities in the voting process.