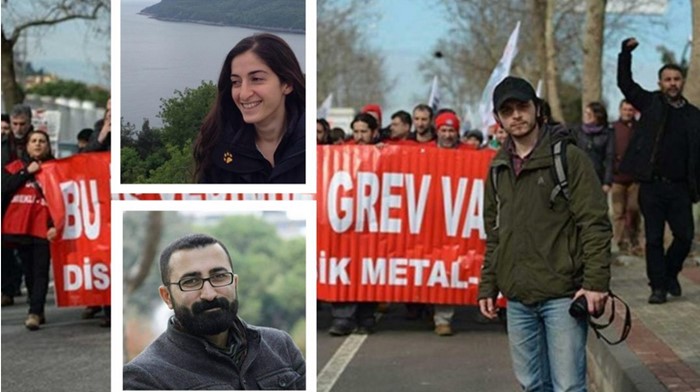 Despite calls from international media organizations to release jailed journalists in Turkey, three more Turkish journalists have been arrested and jailed on charges of disseminating terrorist propaganda and membership in an armed terrorist organization, the T24 news portal reported on Friday.

Ozan Kaplanoğlu, editor of the online platform @BursaMuhalif, was arrested by a Bursa court late on Friday on charges of disseminating the propaganda of a terrorist organization.”

Meşale Tolu and Ulaş Sezgin, reporters from the Etkin News Agency, have also been arrested in İstanbul on similar charges.

They were detained by police a day before May Day celebrations and sent to pretrial detention by a court after spending six days in custody.

Mehmet Güleş, a reporter for the Dicle New Agency, which was closed by the government following a coup attempt in Turkey on July 15, was sentenced by a court in Elazığ province on Wednesday to nine years, four months and 15 days in prison for alleged membership in a terrorist organization and disseminating the propaganda of a terrorist organization.

Ayşenur Parıldak, a former reporter from the now-closed Zaman daily who is among dozens of journalists jailed after a failed military coup attempt in Turkey, was released early on Tuesday but was rearrested by the same court before being freed after a prosecutor objected to the initial ruling.

In a similar case on April 1, the İstanbul 25th High Criminal Court had again arrested 21 out of 26 journalists who were accused of membership in the faith-based Gülen movement, which has been designated as a terrorist organization by the Turkish government and accused of orchestrating a failed coup last summer, despite the fact that the same court had ruled for their release a day earlier.

The decisions came as international organizations waged campaigns to show solidarity with jailed journalists in Turkey on May 3, World Press Freedom Day.

Rights organizations estimate the number of jailed journalists in Turkey as between 159 and 235.

The US-based Freedom House, an independent watchdog organization dedicated to the expansion of freedom around the world, has named Turkey as among the countries that have a “not free” press, in a report released on April 28.

According to Freedom of the Press 2017, the Turkish government, using enhanced powers under a state of emergency, carried out a massive purge of media outlets accused of links to an attempted military coup in July. (Turkey Purge)