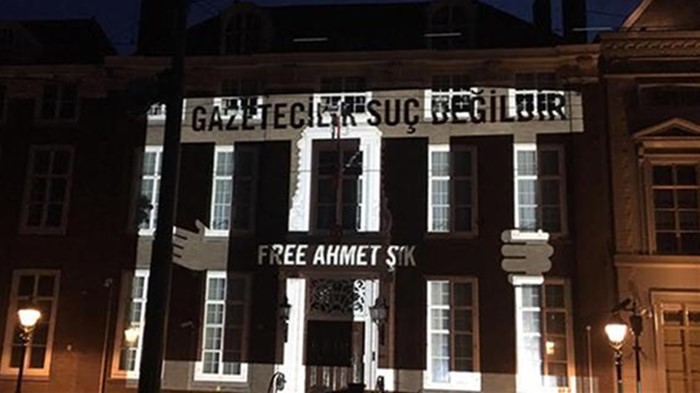 The protest came as a move to draw attention to the “deteriorating” situation of journalists in Turkey and to mark May 3, International Press Freedom Day, according to AI.

Among the journalists whose names were on the building were Mahir Kanaat from the Birgün daily and Ahmet Şık from Cumhuriyet. The names were projected along with a statement demanding their release, at around 10 p.m. on May 2.

“Free Mahir Kanaat” and “Free Ahmet Şık” appeared on the embassy building along with a statement saying “Journalism is not a crime” in both Turkish and English.

Since then, a Twitter account under the pseudonym @FreeTurkeyMedia has been calling on Twitter users to make a #FreeTurkeyMedia sign, take a photo with it and tweet it with the hashtag to support the release of all journalists in Turkish jails. (Turkey Purge)