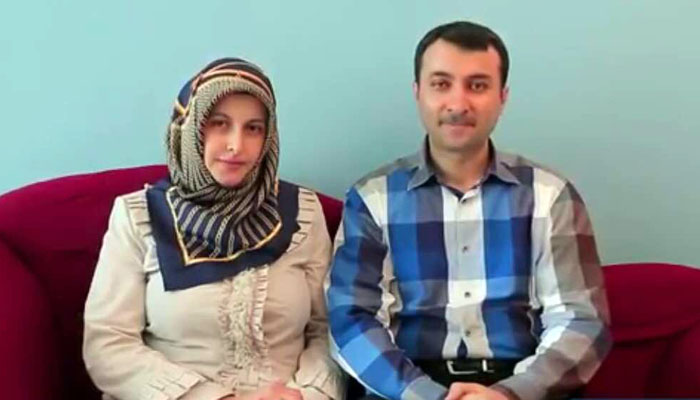 Ayşe Karaman, the wife of Turgay Karaman, who was abducted by five unidentified men on Tuesday in Kuala Lumpur, asked for help from the Malaysian government to determine her husband’s whereabouts.

Speaking in a video recorded after her husband’s abduction on Tuesday, Ayşe Karaman said her husband was kidnapped by five Malaysian men and that she has received no information about him since he was abducted.

Underlining that they have been legally living in Malaysia for 13 years, Ayşe Karaman said her husband is a gentleman who has never been involved in any crime.

“I am calling on the Malaysian government to help as he is a gentleman and never hurt anyone,” she said.

Turgay Karaman, the principal of Time International School in Ipoh, Malaysia, and Turkish businessman İhsan Aslan, were abducted by unidentified persons in Kuala Lumpur on Tuesday.

According to a report submitted by Karaman’s lawyer to the Kuala Lumpur police on Tuesday, Karaman was abducted by five men while he was going to his car in the parking of his apartment.

“These five men forced Mr. Turgay to get into one of their cars, a Nissan Almera, license plate number WQE 8216. The other car [used in the abduction and which followed the first car] is a Proton Gen-2 with plate number BFD 6198,” Karaman’s friend, who submitted the report to the police, wrote.

After Karaman failed to attend a meeting with the friend and a lawyer, the two went to his apartment as they were worried he might have been abducted since two other Turks who were sympathizers of the Gülen movement, which Turkish authorities accuse of being behind a failed coup last summer, were abducted by Turkish intelligence in Malaysia after the putsch.

Upon checking CCTV footage of the parking where his car was left, Karaman’s friends found that he was forced into a car by five unidentified men and taken to an unknown place.

“I request that the police investigate the kidnapping and notify the Immigration Department to stop any attempt to remove Mr. Turgay from Malaysia… I fear for my safety and am worried that this will happen to me and my other Turkish friends,” Karaman’s friend said, according to the report.

Meanwhile, Aslan, a Turkish businessman and a sympathizer of the Gülen movement, was also reportedly abducted on Tuesday, his friends told Turkish Minute. A police report on his abduction is being drafted.

In October of last year, two Turkish citizens were extradited by Malaysian authorities upon a request from their Turkish counterparts as part of the latter’s clampdown against the movement after they were abducted by Turkish intelligence officers in Malaysia.

Turkish government accuses the movement of masterminding the July 15 coup attempt, although the movement denies any involvement.

The movement is known for its education and aid activities in over 170 countries, but Turkish Foreign Ministry bureaucrats have been trying to expand domestic pressure to overseas subsidiaries of the movement in the recent past.