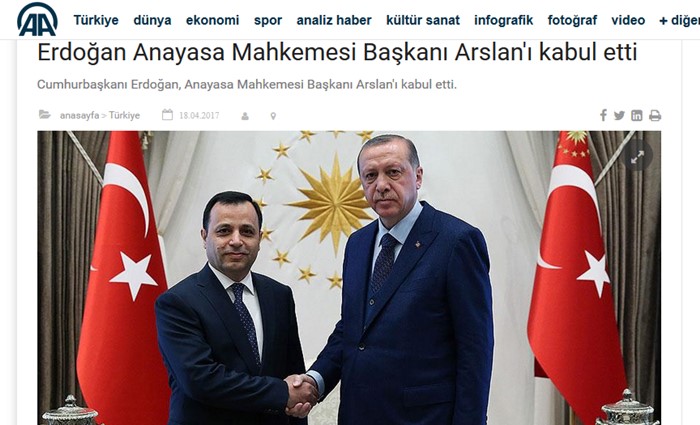 Amid a political crisis concerning the results of a referendum on an executive presidency held on Sunday, the president of Turkey’s Constitutional Court, Zühtü Arslan, on Tuesday visited President Recep Tayyip Erdoğan, the state-run Anadolu news agency reported.

According to the report, Arslan and Erdoğan had a 25-minute meeting that was closed to the press at the presidential palace in Ankara.
Arslan’s visit came hours after the main opposition Republican People’s Party (CHP) applied to the Supreme Election Board (YSK) demanding the cancellation of the referendum due to irregularities in the voting process.

A referendum on a constitutional reform package that introduces an executive presidency in Turkey received 51.4 percent of the vote in favor, but some opposition parties have contested the results due to the use of unauthenticated ballots.

Chairman of the CHP Kemal Kılıçdaroğlu on Tuesday said they do not recognize the results of the referendum held on April 16 due to irregularities in the voting process, saying the party will never recognize the outcome.

Late on Sunday, the YSK issued instructions that significantly changed the ballot validity criteria and said the unauthenticated ballots were valid.