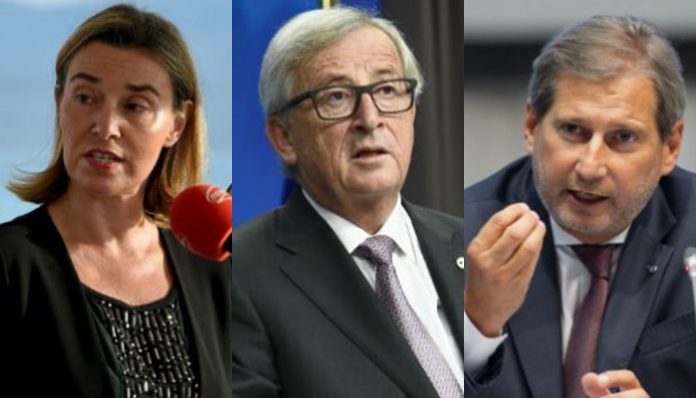 Three top EU officials issued a joint statement on Sunday night after a constitutional reform package seeking to introduce an executive presidency was approved by the Turkish people in a referendum on Sunday, saying that they are waiting for an assessment from the OSCE Office for Democratic Institutions and Human Rights on the Turkish referendum.

President of the European Commission Jean-Claude Juncker, High Representative for Foreign Affairs and Security Policy/Vice-President of the European Commission Federica Mogherini and Commissioner for European Neighborhood Policy and Enlargement Negotiations Johannes Hahn said in their joint statement: “We take note of the reported results of the referendum in Turkey on the amendments to the Constitution, adopted by the Turkish Grand National Assembly on 21 January 2017. We are awaiting the assessment of the OSCE/ODIHR International Observation Mission, also with regard to alleged irregularities. ”

According to unofficial results, the reform package received support from 51.3 percent of the electorate.

The EU officials said the constitutional amendments, and especially their practical implementation, will be assessed in light of Turkey’s obligations as a European Union candidate country and as a member of the Council of Europe.

“We encourage Turkey to address the Council of Europe’s concerns and recommendations, including with regards to the State of Emergency. In view of the close referendum result and the far-reaching implications of the constitutional amendments, we also call on the Turkish authorities to seek the broadest possible national consensus in their implementation,” they added.