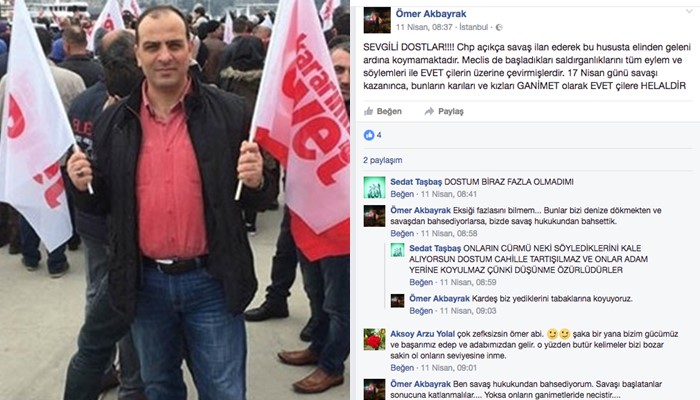 The İstanbul Prosecutor’s Office has launched an investigation into a worker at the Istanbul Municipality who said if constitutional amendments are approved in a referendum on Sunday, the wives and daughters of “no” voters will be halal, or permitted, as plunder and sex slaves for “yes” voters, Al Jazeera Turk reported on Friday.

“Dear friends. The CHP [Republican People’s Party] clearly declared war and has been fighting at full force. They have spread the aggression they launched in Parliament on ‘yes’ voters with their words and deeds. When we win the war on April 17, the wives and daughters of those who vote ‘no’ will be halal to ‘yes’ voters as plunder,” said Ömer Akbayrak, a worker at the İstanbul Municipality, in a social media message on Tuesday.

“In fact, it is necessary to check the laws of war in Islam. When I said ‘halal,’ it means they can be your concubine. In any case, let us win the war first; then we can think about it,” he said in a subsequent tweet.

Akbayrak also likened naysayers to Nimrod and Pharaoh, saying: “They declare war and we wage jihad, and we will have booty until Judgment Day.”

The municipality announced that Akbayrak has been suspended and that an investigation has been launched into him.

Hayrettin Karaman, a leading theologian and issuer of fatwas, or religious edicts, for ruling Justice and Development Party (AKP) circles and Turkish President Recep Tayyip Erdoğan, wrote in a column on Thursday that casting a “yes” vote in a referendum on April 16 is a fard, the Islamic term for a religious obligation.

Karaman had also said that the “no” voters in the April 16 referendum are opponents of Islam.

Sacit Arvasi, a US-based Turkish theologian whose religious sermons are widely popular among his Facebook followers, blasted pro-government circles for misleading people about religion by attributing divine characteristics to President Erdoğan and asked, “Do you consider him to be God?”

Criticizing recent remarks by a pro-Erdoğan cleric declaring people who plan to vote against Erdoğan’s desires to be partners of Satan, Arvasi angrily said, “Keep your dirty hands off our religion, our faith, our Quran.”

The ruling AKP, backed by the Nationalist Movement Party (MHP), pushed through the legislation that President Recep Tayyip Erdoğan says will bring the strong leadership needed to prevent a return of the fragile coalition governments of the past.

The CHP and the pro-Kurdish Peoples’ Democratic Party’s (HDP) fear the reform will fuel authoritarianism.