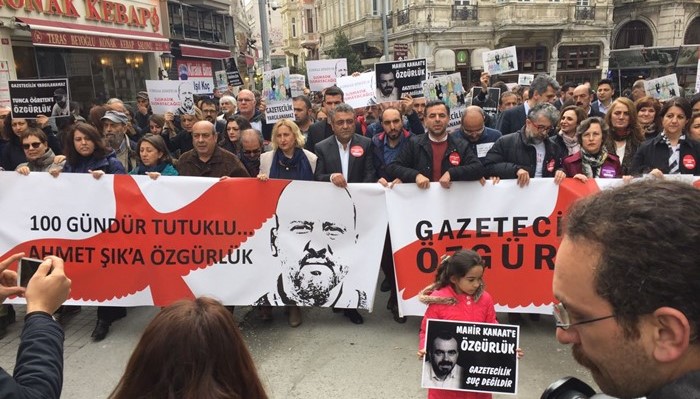 On the 100th day of the detention of journalist Ahmet Şık, journalists and deputies on Sunday walked in İstanbul for the release of all jailed journalists in Turkey.

Şık was arrested on Dec. 30, 2016 on charges of disseminating the propaganda of terrorist organizations.

The “100 Step Walk” down Istanbul’s İstiklal Street was participated in by main opposition Republican People’s Party (CHP) and pro-Kurdish Peoples’ Democratic Party (HDP) members as well as media organization representatives and journalists, who chanted “Free media can not be silenced” and “Down with despotism! Long live freedom!”

Twenty-one journalists who had been in pre-trial detention for eight months and were to be released pending trial on March 31 were arrested again early on April 1 without ever having been freed.

According to the Turkish Journalists Union (TGS) 156 journalists and media members are behind bars in Turkey.