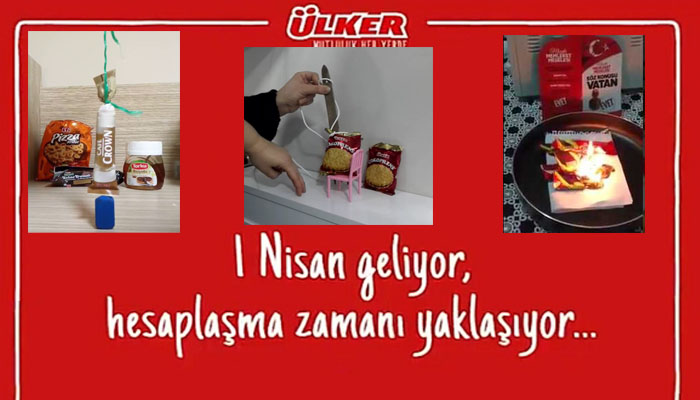 Supporters of the ruling Justice and Development Party (AKP) are protesting Turkey’s global food giant, Ülker, which recently drew attention with a controversial TV commercial, by posting videos in which they cut, stab and execute biscuits and chocolates produced by the company.
An April’s Fools Day advertisement by Turkey’s largest food company, Ülker, triggered panic among AKP supporters amid accusations that the video heralded a military coup.
The commercial was released on social media on March 31 and described the bad side of being a younger sibling, saying “the time for revenge” is near.

“April 1 is coming, the time for revenge is approaching…”

The voice in the ad continues “Younger brothers have a surprise for their elder brothers and sisters on April 1. … It is hard to be a younger brother, [but] it is time for revenge.”

Minutes after it was released, Ülker withdrew the ad and the company’s CEO Murat Ülker tweeted that it was a plot against the company.

“I am abroad. I have just heard the news. Thanks to those who let me know about it. Those who set this plot will not get away with it. We stand by our nation,” he tweeted.

Meanwhile, some dissident social media users said the commercial was prepared only for the government to take over the global food producer.

Turkey survived a military coup attempt that killed more than 250 people on July 15, 2016 while the government launched a nationwide witch-hunt to detain 94,000 in the name of anti-coup operations.

Earlier, pro-government media outlets hinted at alleged links between Ülker and the Gülen movement, which the government accuses of masterminding the July 15 coup attempt.

The Turkish government has already confiscated more than 800 companies as part of its post-coup investigations into the movement.

Following the incident, some criticized the lynching against Ülker by calling it paranoia, while many pro-government Twitter trolls called on the government to launch an investigation into the company.

“This ad is a total disgrace. What do you mean by ‘revenge time’?” Cem Küçük, a pro-government columnist tweeted.

On April 1, the Istanbul Prosecutor’s Office launched an investigation into the company, ruling AKP deputy Metin Külünk said in a Twitter message.

“The Istanbul Prosecutor’s Office has launched an investigation because of the commercial,” said Külünk in his tweet.