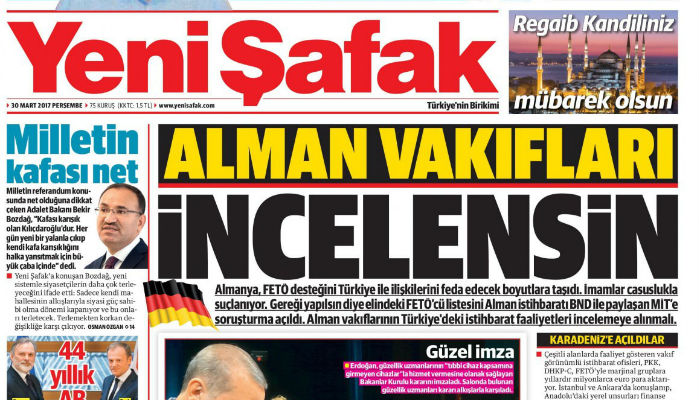 The pro-government Yeni Şafak daily has called on Turkish authorities to launch an investigation into German foundations in Turkey, claiming that these organizations are involved in intelligence gathering activities under the cover of a foundation.

In its major story on Thursday, Yeni Şafak said the real blow to the German Federal Intelligence Service (BND)-centered foundations operating in every part of the country will be dealt following the April 16 referendum in which a constitutional reform package will be voted.

“German foundations come out behind every attempt against Turkey. Germany, which acts as the guardian of terror organizations such as FETÖ [a derogatory term used to refer to the faith-based Gülen movement], the PKK [outlawed Kurdistan Workers’ Party] and the DHKP-C [Far-left Revolutionary People’s Liberation Party/Front], not only protects the terrorists from the Turkish security units but also operates in every part of Turkey through its spying foundations. Most of the 22 foreign foundations that operate in Turkey belong to Germans, and the involvement of these foundations in many acts of terror groups is striking,” the daily wrote.

The Turkish government accuses the Gülen movement of masterminding a failed coup attempt on July 15 and being a terror organization despite the lack of any evidence to substantiate its claims.