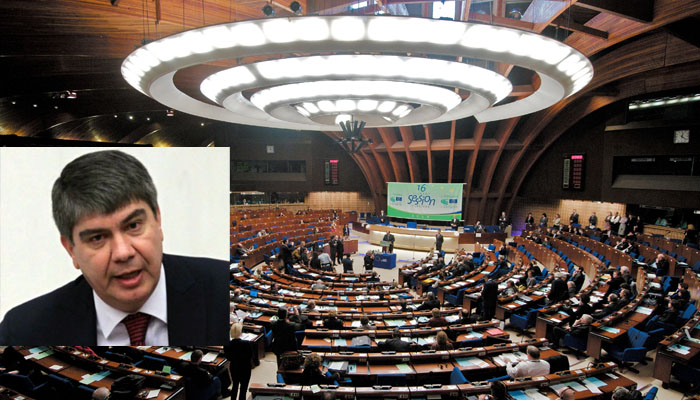 Ruling Justice and Development Party (AKP) Antalya Mayor Menderes Türel, who represented Turkey at the Congress of Local and Regional Authorities of the Council of Europe (CoE) on Wednesday, criticized the council for rejecting Turkey’s demand that the faith-based Gülen movement be mentioned in a report as being behind a failed coup last summer.

Speaking to reporters in Antalya on Thursday after his arrival from the meeting in Strasbourg, Türel said, “I condemn this disgraceful decision.”

The CoE adopted a recommendation and resolution on the situation of mayors and councilors in Turkey, and, in particular, on the detention of elected mayors and their replacement by mayors appointed by the central authorities.

Co-rapporteurs Anders Knape of Sweden and Leen Verbeek of the Netherlands presented the report following two fact-finding missions to Turkey in 2016.

“FETÖ,” or the Fetullahist Terrorist Organization, is a derogatory term coined by President Recep Tayyip Erdoğan and the ruling Justice and Development Party (AKP) to refer to the faith-based Gülen movement, a global civil society movement inspired by the views of US-based Turkish Islamic scholar Fethullah Gülen who is accused of being the mastermind of the failed coup.

Although the Gülen movement strongly denies having any role in the putsch, the government accuses it of having masterminded it. Gülen called for an international investigation into the coup attempt, but President Erdoğan — calling the coup attempt “a gift from God” — and the government initiated a widespread purge aimed at cleansing sympathizers of the movement from within state institutions, dehumanizing its popular figures and putting them in custody.

The CoE report asks the Committee of Ministers to urge Turkish authorities to rescind the legislative measures on “mayors appointed by the central authorities” and restore the ability of municipal councils to choose a replacement mayor.

It also points out that the arrest of a local elected official must be duly substantiated in domestic law, taken in conformity with the standards of the CoE and, in particular, with the European Convention on Human Rights (ECHR). The congress also calls for the revision of Turkish legislation to align its definition of terrorism with European standards, in particular the case law of the European Court of Human Rights (ECtHR).

The congress in addition requests revision of ministerial instructions from November with a view towards decriminalization of the appointment of co-mayors and agreed to review the situation of Nurhayat Altun, member of the Turkish delegation of the congress and co-mayor of Tunceli who was arrested on Nov. 17, 2016 and is currently incarcerated.

The congress says it is ready to work with Turkish authorities to strengthen local democracy and to combat terrorism and violent extremism and proposes that the human rights commissioner in visits to Turkey pay particular attention to the situation of elected mayors. It also recommends that the Venice Commission draft an opinion on the constitutionality of the measures contained in Decree No. 674 that concern the exercise of local democracy in Turkey.