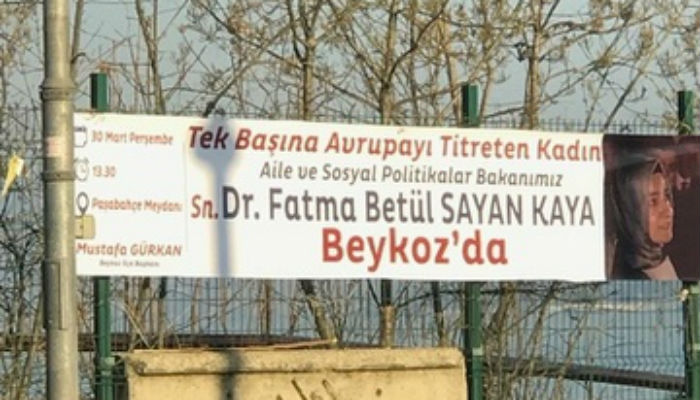 A banner prepared by the Beykoz Municipality in İstanbul praises Family and Social Policy Minister Fatma Betül Sayan Kaya as the “woman who made Europe tremble,” due to the minister’s recent involvement in a diplomatic crisis with the Netherlands.

Kaya was expelled from the Netherlands on March 11 after insisting on going to the residence of the Turkish Consulate General in Rotterdam to hold a campaign rally. Kaya was prevented by police from entering the residence to deliver a campaign rally speech. After Minister Kaya announced that she would travel to Rotterdam by car from Germany, Dutch police stopped the her car and asked her to leave. She was declared persona non grata and expelled at the German border.

The banner prepared by the Beykoz Municipality announces that the minister will be in the district on March 30 for a campaign rally for an upcoming referendum during which a constitutional reform package, which will introduce an executive presidency in Turkey, will be voted.

Turkey’s relations with Germany, Austria and the Netherlands have been strained over these countries’ refusal to allow Turkish government officials to hold rallies there ahead of the public referendum in Turkey on April 16.