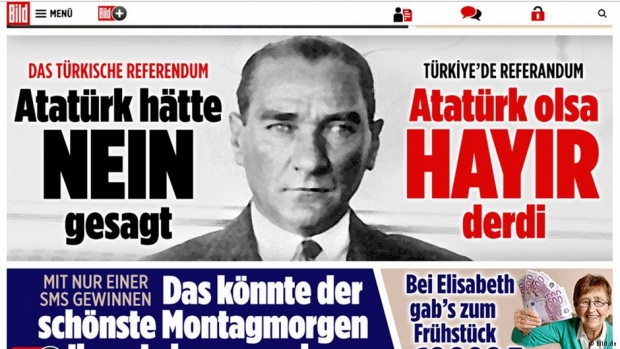 Germany’s best-selling newspaper Bild said in one of the headlines on its website on Monday that if the founder of modern Turkey, Atatürk, were alive today, he would vote “no” in a public referendum to be held in April.

Turkey will hold a public referendum on April 16 that will introduce an executive presidency in the country if approved.

In both Turkish and German, Bild wrote: “Referendum in Turkey. If Atatürk were alive, he would say ‘no’.”

The remarks came from Burak Çopur, an expert on Turkey from Essen University, who spoke to the daily about the Turkish referendum.

“If Atatürk were alive, he would say ‘no,’ because he was authoritarian but not totalitarian,” Çopur told the daily.

Turkish citizens in Germany on Monday began to cast their votes for the referendum.