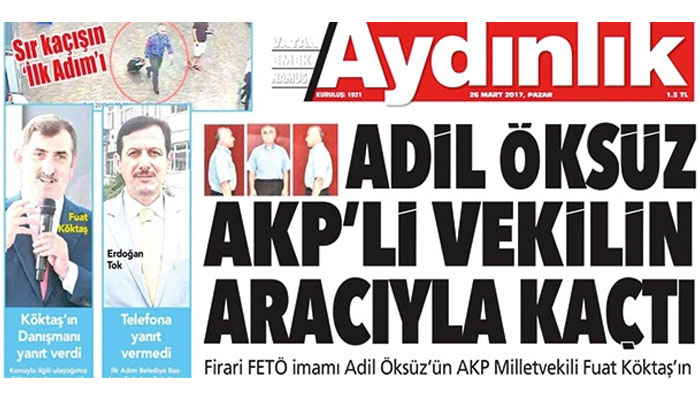 A statement by the office on Sunday said a report by the Aydınlık daily, which is associated with ultranationalist Homeland Party (VP) of Doğu Perinçek, saying Öksüz came to Samsun from Ankara in a car belonging to Köktaş and stayed at a house owned by Tok in Samsun until he fled abroad is not true.

“It is out of the question that there is any investigation into İlkadım mayor Erdoğan Tok for helping coup attempt suspect Adil Öksüz to escape. There is no legal investigation by the Samsun Public Prosecutor’s Office as there are no MOBESE (CCTV) recordings or images,” said the statement.

According to Aydınlık, Öksüz, who was briefly detained in Ankara on July 16 following the coup attempt, was brought to Samsun in Köktaş’s car and hid in Tok’s house until he was taken to the port of Yeşilyurt and left for Batumi, Georgia, in a ship.

Aydınlık also claimed that Öksüz is hiding in Kyrgyzstan, where he went from Georgia, and is planning to go to Canada.

Turkish authorities accuse Öksüz of being one of the leading figures in the failed coup last summer and having connections with the faith-based Gülen movement, which is also accused of masterminding the coup attempt.

Following the coup attempt, pro-government media outlets reported that Öksüz was briefly detained when he was leaving the Akıncı Main Jet Base Command in Ankara after meeting several soldiers there and subsequently released.

Prior to the coup attempt, Öksüz was an academic in Sakarya University’s theology department.

Turkey survived a military coup attempt on July 15 which killed over 240 people and wounded more than a thousand others. Immediately after the putsch, AKP government along with President Recep Tayyip Erdoğan pinned the blame on the Gülen movement despite the lack of any evidence to that effect.