Richard Moore, the United Kingdom’s ambassador to Turkey, criticized an advisor of President Recep Tayyip Erdoğan for not condemning a London terror attack that killed five people and wounded many more on Wednesday.

A chief advisor to Erdoğan, Burhan Kuzu, who is also a professor of constitutional law, commented on the London terror attack in the early hours of Thursday.

“Terror attack in England. Terror says Europe: The UK is your safest region? I would hit you in your safest place,” Kuzu wrote on Twitter.

UK Ambassador Moore responded to Kuzu on Twitter early on Friday, writing: “No condemnation? No solidarity? Shame,” and asked him, “Do you not agree with the kind messages of President Erdoğan, Prime Minister Binali Yıldırım and other ministers?”

Albayrak tweeted after the London attack and condemned Turkish TV stations for “contributing to the perception operation” being conducted by the British. 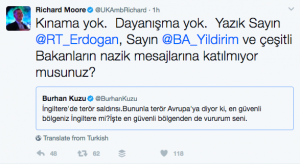