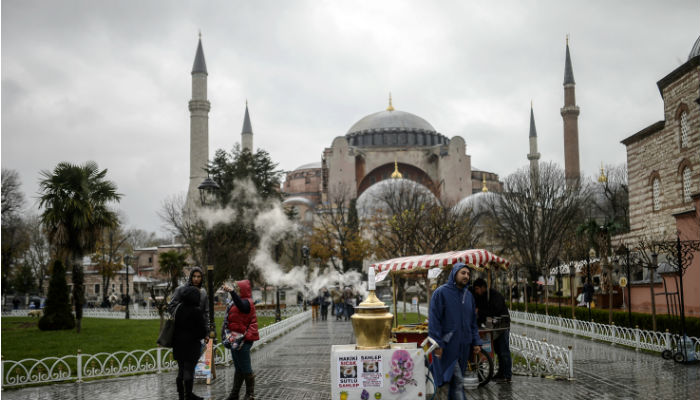 Turkey’s historic Hagia Sophia museum will be converted into a mosque, and President Recep Tayyip Erdoğan and officials from the Justice and Development Party (AKP) will perform Friday prayers there, according to a report in the Sözcü daily on Monday.

The report, written by Zeynep Gürcanlı, claims that the move will be aimed at increasing “yes” votes in a public referendum to be held in April.

“Amid the cross versus the crescent discourse, there is serious talk at the presidential palace about plans to end Hagia Sophia’s museum status and open it to Muslim prayer at full capacity,” Gürcanlı wrote.

Built in 537 by Byzantine Emperor Justinian, whose rule stretched from Spain to the Middle East, Hagia Sophia — meaning “Divine Wisdom” in Greek — was unrivalled in the Christian world until Ottoman Sultan Mehmet II conquered the city in 1453 and turned it into a mosque. Mustafa Kemal Atatürk, the founder of modern Turkey, decreed it a museum in 1934.

In a speech last week, President Erdoğan said that a recent decision by the European Court of Justice against two female employees in Belgium and in France who were dismissed from their jobs for refusing to remove their headscarves started a war between Islam and Christianity in Europe.

“The European Union, they started the war of the cross and the crescent. There is no other explanation,” Erdoğan said.

The European Court of Justice ruled last Tuesday on the cases of two female employees in Belgium and in France who were dismissed for refusing to remove their headscarves, finding no unfair treatment.

Erdoğan has been using an increasingly anti-European discourse recently due to some European countries’ refusal to allow Turkish government officials to hold campaign rallies for the upcoming referendum.

A constitutional package which will be voted in the referendum will introduce an executive presidency in Turkey if approved.