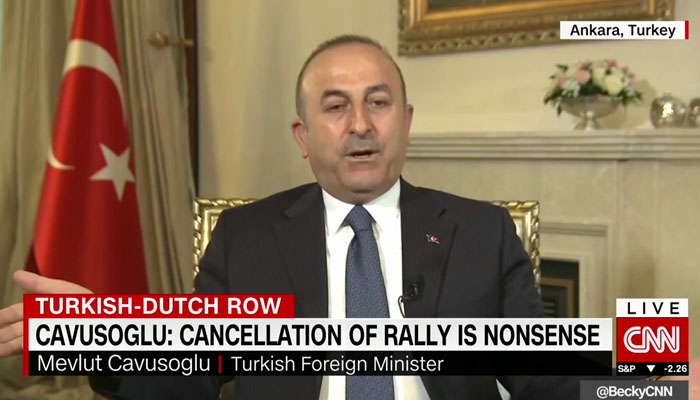 Turkish Foreign Minister Mevlüt Çavuşoğlu reacted to the Dutch government during an interview with CNN on Monday for not allowing him to enter the Netherlands for a referendum rally, saying, “I am not a terrorist.”

Speaking during an interview Monday with CNN’s “Connect the World,” Çavuşoğlu demanded answers from The Hague about preventing him from visiting the Netherlands to campaign for a Turkish referendum on April 16 that will change the country’s system of governance into an executive presidency.

“Why this time? Am I a terrorist? Are the Turks living in this country terrorists?” he asked.

Describing the Dutch government’s excuse of security reasons for not allowing him to visit the Netherlands as “nonsense,” he said, “Why were there no security issues for earlier visits to the Netherlands during earlier elections?”

Çavuşoğlu said the present Dutch government under the leadership of Prime Minister Mark Rutte has rhetoric and policies similar to those of the fascist Geert Wilders and added, “No matter what the results of the [Dutch] elections are on Wednesday, Wilders’ supporters will be happy.”

A crisis erupted between Turkey and the Netherlands when The Hague canceled the flight clearance for Çavuşoğlu’s airplane on Saturday shortly after Çavuşoğlu warned that Turkey would impose “harsh sanctions” on Holland if it were to take such a step.

The crisis reached new heights when Turkish Minister of Family and Social Policy Fatma Betül Sayan Kaya was expelled from the Netherlands on Saturday night after she insisted on going to the residence of the Turkish Consulate General in Rotterdam to make a campaign speech.

Turkish President Recep Tayyip Erdoğan denounced the Netherlands as “Nazi remnants and fascists” after the Dutch government withdrew permission for Çavuşoğlu’s plane to land on Saturday.

Turkey has issued two diplomatic notes to the Netherlands and also demanded a written apology since the crisis erupted, while Turkish government officials are talking about imposing sanctions on the country.