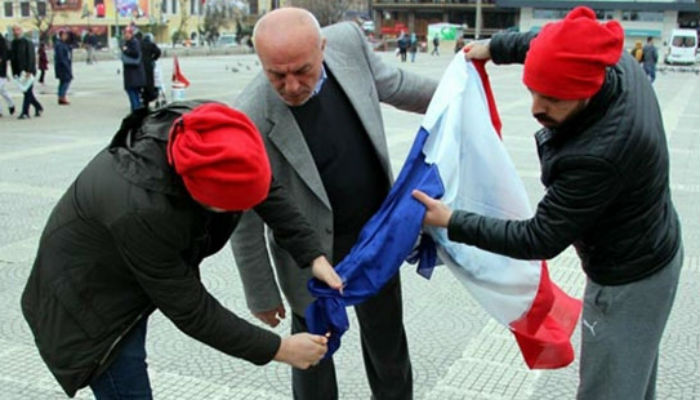 A group of protestors in the Black Sea province of Samsun have burned a French flag as they mistook it for the Dutch flag after the eruption of a diplomatic crisis between Turkey and the Netherlands due to the latter’s refusal to allow two Turkish ministers to hold campaign rallies in the country.

Turkish news outlets reported on Sunday that the protestors in Samsun burned a Dutch flag after reciting the Turkish national anthem and unfurling Turkish flags in a sign of protest against the Netherlands.

However, video footage and photos released by the news agencies showed that the protestors in fact burned a French flag.

A crisis erupted between Turkey and the Netherlands when The Hague canceled the flight clearance for Turkish Foreign Minister Mevlüt Çavuşoğlu’s airplane on Saturday shortly after Çavuşoğlu warned that Turkey would impose “harsh sanctions” on Holland if it were to take such a step.