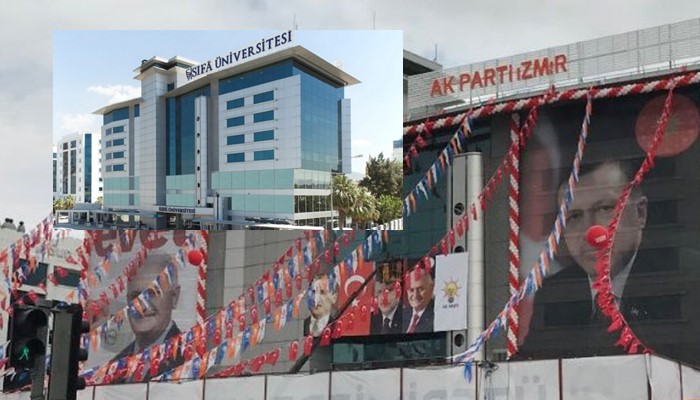 Şifa University, which was seized by the Justice and Development Party (AKP) government due to links to the Gülen movement, has been transformed into the AKP’s İzmir provincial headquarters.

The government appointed trustees to Şifa University in May 2016 and closed it down along with many other institutions on July 23, 2016 following a failed coup attempt on July 15.

According to the Sözcü daily, the inauguration ceremony of the new AKP headquarters in İzmir was attended by Prime Minister Binali Yıldırım over the weekend.

As part of a witch-hunt targeting the Gülen movement, which is accused by the government of masterminding a failed coup attempt on July 15, 2,099 schools, dormitories and universities have been seized.

Last month, one of the five largest sock companies in Turkey, Akın Çorap, which has an annual turnover of $50 million, was transferred to Turkey’s state-run Savings Deposit Insurance Fund (TMSF) due to its alleged links to the faith-based Gülen movement.

In a similar move in February, government appointed trustees to giant textile company the Aydınlı Group, the official representative of brands such as Cacharel, Polo US and Pierre Cardin in Turkey, and one of the largest baklava makers of the country, Güllüoğlu Baklava.

In January, an Ankara court ordered the seizure of all assets of Turkish businessman Akın İpek and his mother, Melek İpek, over their alleged links to the faith-based Gülen movement.

On Oct. 24, 2015, the government appointed trustees to take over the management of dozens of companies belonging to the İpek family in addition to several media outlets operating under the İpek Media Group, due to their critical stance against the government.

Turkey has already confiscated some TL 12 billion (about $4 billion) in property that belonged to the İpek family as part of an investigation into the Gülen movement, according to a statement by Minister for Environment and Urbanization Mehmet Özhaseki on Sept. 1, 2016.