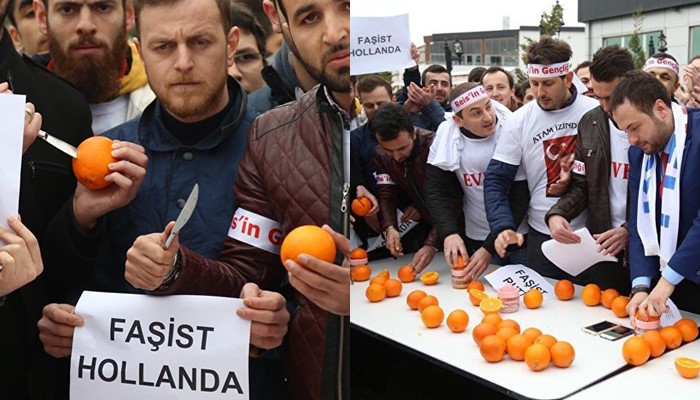 Supporters of the ruling Justice and Development Party (AKP) protested the Netherlands on Sunday by cutting, skewering and squeezing oranges in İzmit after Turkish Minister of Family and Social Policies Fatma Betül Sayan Kaya was expelled from the country by Dutch police when she insisted on going to the residence of the Rotterdam consulate general, Sputnik reported.

Orange is the color of the Dutch royal family.

According to the report, calling the Netherlands “fascist” Emre Kahraman, head of the AKP İzmir youth branch, said: “Their humanity is below sea level, just like their country is. They will be sorry for what they have done.”

Youths calling themselves “Reis’s [President Recep Tayyip Erdoğan] youths,” cut, skewed and squeezed oranges in protest of and as a challenge to Holland.

A group of protesters who gathered in front of the Dutch Embassy in Ankara on Saturday night uprooted the street sign for a boulevard named after the Netherlands.

A protester in İstanbul on Sunday removed the Dutch flag from the consulate general building and replaced it with a Turkish flag.