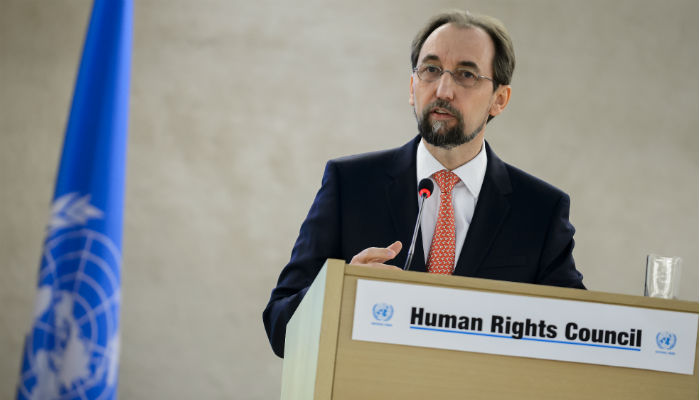 A state of emergency was declared in Turkey in the aftermath of a failed coup attempt on July 15.

Releasing his Annual Report and Oral Update to the 34th session of the UN Human Rights Council on Wednesday as he informed members of the council on various issues around the world, Al Hussein said: “In Turkey, bombs and other shocking terrorist attacks against civilians continue to claim lives, which I condemn, and I fully understand the authorities are operating in a challenging environment in many respects. However, I am concerned measures taken under the state of emergency appear to target criticism, not terrorism. The fact that tens of thousands of people have been dismissed, arrested, detained or prosecuted following the attempted coup – including numerous democratically elected representatives, judges and journalists – raises serious alarm about due process guarantees being met. ”

Al Hussein also said it will be particularly crucial for the credibility of April’s referendum on amending the Constitution that space for open debate, free of intimidation, be guaranteed.

Turkey will hold a referendum on April 16 which will introduce an executive presidency in Turkey.

“Without access to the area, the remote monitoring procedure engaged by my Office has established credible indications of hundreds of deaths, suggesting disproportionate security measures in response to violent attacks,” said the UN official.

Acts of violence rapidly increased and a settlement process between the Turkish government and the outlawed Kurdistan Workers’ Party (PKK) came to an end in the summer of 2015. Hundreds of civilians, soldiers and police officers have been killed in terror attacks perpetrated by the PKK since then.