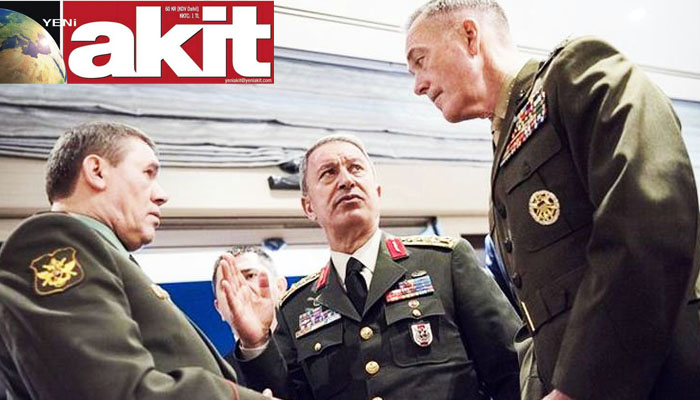 The pro-government Akit daily on Wednesday posted a photo of Chairman of the US Joint Chiefs of Staff Gen. Joseph Dunford speaking with Turkey’s Chief of General Staff Gen. Hulusi Akar and his Russian counterpart, Gen. Valery Gerasimov, on the sidelines of a trilateral meeting in Antalya and published a caption mocking Dunford.

In the caption below a photo in which a serious-looking Akar is shown speaking to Dunford with his right hand is in the air, Akit said: “If you [Dunford] didn’t understand, an Ottoman slap is coming [your way]. That it the real Turkish pasha. That is the scene we miss. Revival after 400 years.”

The three counterparts attended a military summit on Tuesday to discuss preventing clashes between their countries’ forces and the factions they support in Syria, and to determine the next steps in a campaign against the Islamic State in Iraq and the Levant (ISIL).