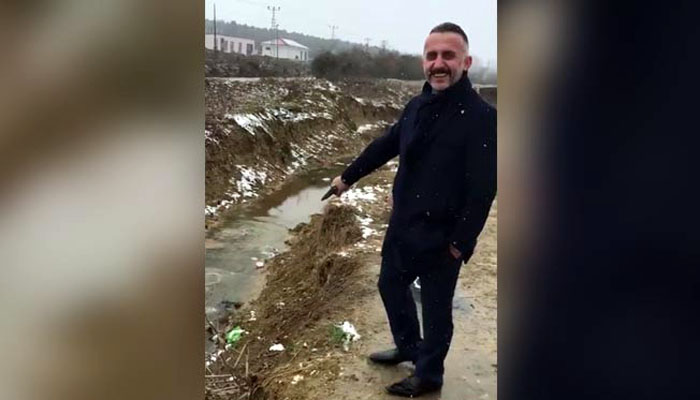 Ruling Justice and Development Party (AKP) Sinop provincial executive committee member Musa Yıldırım resigned after a video showing him firing a gun in an empty field in order to threaten people who are planning to vote “no” in a referendum in April went viral on social media.

The video, which was first shared by local halksesi.com editor Mete Çağdaş, shows that Yıldırım fires his gun several times and smiles after the person who recorded the video asks him, “Brother Musa, what will we do with people who say ‘no’ to a strong Turkey?”

In a statement on Monday Yıldırım apologized and resigned from the party.

“The video was recorded on Jan. 26, 2017, two weeks before the President [Recep Tayyip Erdoğan] approved the decision on the referendum. I didn’t hear what my friend who recorded the video said, and I fired my gun into the water in order to try it out [the gun]. We kept the video as a memory. I didn’t hear what he said and didn’t mean to threaten anyone. My friend wanted to send the video back to me. However, it was leaked by a party man who became envious of me after my friend sent it to the AKP Sinop [provincial branch] WhatsApp group,” he said.

He resigned, saying: “I withdraw from active politics and resign [from my party]. I apologize for the misunderstanding I caused. I apologize to the Turkish public.”

Last week, a passenger on a public bus in İstanbul who claimed to be a staunch supporter of President Erdoğan threatened a group of “no” leaning voters in an upcoming referendum in Turkey, saying they will be put to the sword since the Ottoman Empire will be revived.

On Feb 12, Turkish Bureau Union (Türk Büro Sen) Chairman Fahrettin Yokuş, who called on people to vote “no” in the referendum, was the target of gunshots in Ankara.

On Feb. 16, two members of the main opposition Republican People’s Party (CHP) were verbally and physically assaulted while campaigning from door to door in İzmir. A man known only by the initials A.B., who said he was from a local branch of the AKP, accused the CHP members of trying to “undermine the state” while his son O.B. hit the two women in the back.

On July 15 of last year, Turkey survived a military coup attempt that killed over 240 people and wounded more than a thousand others.